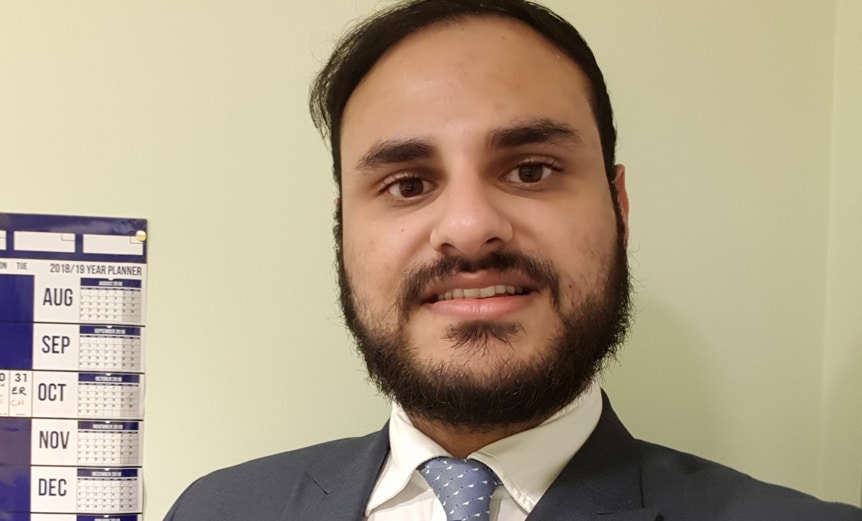 Irfan Aziz, optometrist director in Longbridge and Northfield, describes how his boss, Declan Casserly, mentored him to become his business partner.

Three months later, he became director of a second store in Northfield, nearby.

‘I felt really happy that all my hard work was paying off,’ Irfan says. ‘I’d been lucky because I’d built a relationship with the right people and proved myself in a short space of time.’

Irfan gained a BSc in optometry from Aston University in 2011. He worked as a mobile optometrist in the West Midlands before joining Specsavers Northfield in October 2013 as a resident optometrist.

Career progression was a key factor in Irfan’s decision to move to Specsavers. ‘The salaries are better and you can progress to a better level,’ he says. ‘Once I started with Specsavers it was only a few months before the possibility of a partnership was mentioned.’

Declan, who opened Specsavers Northfield as a JVP in 1999, saw Irfan’s potential straight away. ‘It was clear from the moment Irfan started that he was a very ambitious, hardworking individual,’ he says. ‘He has high standards for himself and he expects all his colleagues to work to a similar standard. He also has very good communication skills and fitted well into the team.

‘During one of our first meetings he spoke about his aspiration to become a JVP. I was pleased that he wanted to pursue this goal and knew he had the drive, hard work ethos and mental strength to achieve it.’

Declan helped Irfan map out a plan, including building his profile and gaining accreditations.

Irfan says: ‘My conversion rate and figures were quite good, so Declan called Jagtaar Singh, the retail performance consultant at the time, and I gave a presentation to the optometrists and managers on how to improve conversions. It went very well and also made my name known to someone outside the store. From there, Declan and Jagtaar put me on ILM Level 3 [a qualification in leadership and management].’

‘While I was on Pathway, Jagtaar was talking to Declan about a new store opening at Longbridge. Declan was to be a director and he said he’d like me to be the other director. Jagtaar got to know me better and he said he was happy with the idea of co-owning a business with me if I passed Pathway, which I did in July 2016.’

The career progression is so good.

Irfan is full of praise for the help he received from the company. ‘I love the fact that the career progression is so good. I don’t think any other company would have given me as much support to become a director.’

The Longbridge opening was so successful that Declan and Irfan had to take on more staff: there are now 13 staff members and one optometrist (Irfan).

In March 2017, Northfield’s retail director left – and to Irfan’s surprise, he was offered that partnership, too.

He says: ‘I didn’t think they’d offer me a second store so quickly, particularly as Northfield is a large store with 25 staff members and four optometrists.’

At present Irfan is content with two stores and has plans to expand Longbridge. He says: ‘In five years’ time, if another opportunity presents itself I might be happy to take it on.’

The pair get on very well, and Irfan believes this is crucial to the partnership’s success. ‘I was Declan’s employee but we were also friends, and that helped hugely,’ he says. ‘It can be difficult to make changes in an established business if you don’t have that rapport.’

Declan is proud of Irfan’s achievements. ‘When I heard that he’d passed Pathway and all his interviews to become a JVP I was delighted for him, and delighted that we’d be able to continue to work together. The partnership is working really well between us, as we knew it would.’

‘It’s a pleasure and an incredible feeling to help someone achieve their aspirations.’