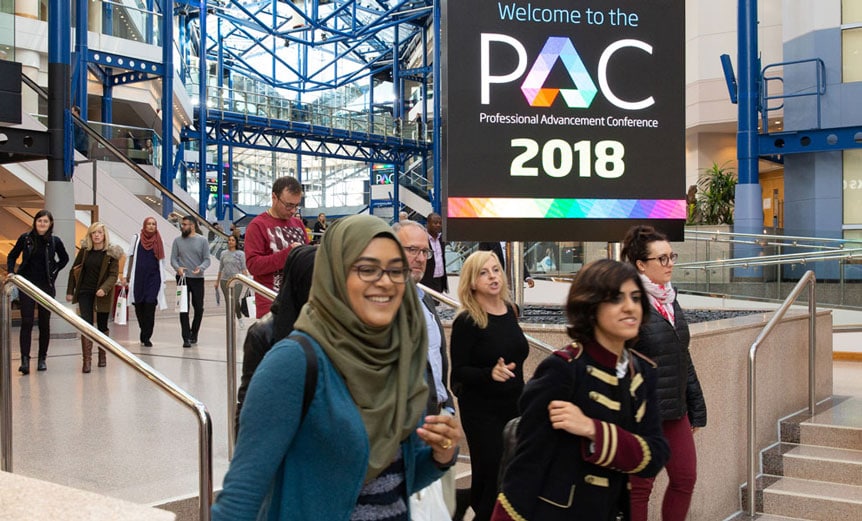 Specsavers’ Professional Advancement Conference (PAC) celebrates its 25th year in October. Optometrist Paul Carroll, Specsavers’ director of professional services, was one of the small group of store partners who established the flagship conference in 1995. He discusses how optical education has changed over the last quarter of a century.

“As well as reflecting the changes in optical education, I think PAC has also influenced those changes. It encouraged other optical conferences to come into the market, and I suspect it’s the standard against which many of those conferences measure themselves. There’s a real buzz when you go to PAC, and all the practitioners are really excited, engaged and interested, which makes me very proud.

It all began with the Professional Advancement Committee, a small group of store partners with a shared interest in promoting high professional standards, helping Specsavers achieve a leading role in continuing education, and increasing awareness of this in the wider profession.

One of the committee’s early ambitions was to deliver a national conference because, at that time, nothing of its sort existed. It wasn’t until January 1996 that the College of Optometrists introduced a continuous education and training (CET) pilot scheme. And while the GOC had stated its long-term aim that CET should become compulsory for all practitioners, that didn’t happen until 2005.

Colleagues recognised that CET was becoming an important feature of our professional lives and we had a responsibility to ensure that we comply with accepted best practice and current thinking. We recognised that new techniques and treatments are constantly evolving, and we must be active to keep abreast of these changes.

1995 was before the advent of Sunday trading, so it was the obvious day to deliver a conference that would enable practitioners to attend without having to cancel clinics. However, asking people to give up a Sunday meant that content, presentation and production values would have to be excellent, and venue selection was critical.  Our challenge was to deliver something that would entertain and stimulate as well as train.

We chose the ICC in Birmingham as the ideal venue and on 15 October 1995, our first conference was held.

These days, we take over most of the ICC and regularly attract more than 2,000 delegates. In 1995, we just had one room – a 300-seater hall – but it was fully booked, with a waiting list. Company co-founders Doug and Dame Mary Perkins attended and were very excited by the number of people voluntarily giving up their Sunday to develop themselves. The delegates were mostly Specsavers optometrists, with some locums and external optometrists.

For the first few years, we only did one stream and the format was fairly conventional lectures. Our first conference was called ‘Referral dilemmas’ and focused on ophthalmology. Our second was ‘Keeping in contact’ and focused on contact lenses. Among the many leading speakers was Professor Nathan Efron, who used his 500-strong audience for instant research to support the work he was doing developing his contact lens complication grading scale.

In 1998, we broadened the format with interactive quizzes. As PAC grew, we responded to feedback and introduced parallel tracks, in particular for dispensing opticians and contact lens opticians.

In the early days, we always took feedback about what practitioners would like to learn more about. But the introduction of multiple streams meant we no longer had to find a common theme – we could do a broader spread of topics. We started ‘environment scanning’ – looking at where the sector was going and what the learning requirements would be. For instance, three years ago we knew that Specsavers was going to be introducing OCT (optical coherence tomography) across the Group, so we started increasing the number of OCT workshops at PAC.

We were always looking for innovative ways to help our colleagues with their development. That’s why we approached the College of Optometrists with a proposal to create a high-quality CET journal – launched in 2000, with PAC support, as Optometry in Practice.

In 2005, the GOC introduced mandatory CET. I believe PAC’s success played a part in the decision, as it was clear there was an appetite for it – the practitioners were hungry to learn.

By this time, PAC added tracks for trainee optometrists, trainee dispensing opticians and supervisors. We recognised that different people learn in different ways, so the format changed too, with interactive presentations, workshops, and CET quizzes. We always tried to pitch our presentations in an entertaining way, so people felt curious about the topic. For instance, when we had a lecture on differential diagnosis of red eye, our title was ‘Red eye – bar fight or late night?’

In 2012, the GOC introduced a requirement for a certain amount of peer discussion each year. Our peer discussion sessions involve a session leader who oversees the whole room, introduces the session and does a 20-minute presentation. Then you have about 20 tables of 10 people with an experienced clinician acting as a facilitator on each table, plus roving facilitators who make sure everybody’s up to speed. The sessions work very well and our model is one that lots of conferences now use.

There’s so much going on at PAC that you can get a year’s worth of CET in one day. Of course, you can do CET online. But the fact that so many practitioners attend PAC (many as well as doing online CET) is testament to its appeal. They appreciate the opportunity to pick and choose how they access their learning. And they value the chance to hear interesting speakers and interact with others.

In 2011, sessions for Specsavers audiologists were introduced and, this year, we’re also opening it to external audiologists. In the last couple of years we’ve invited second year undergraduates to attend free of charge.

I’m sure Specsavers colleagues in other countries have been influenced by what we’ve achieved in the UK, and there are now six clinical conferences in Europe and one in Australia. Colleagues from the Netherlands and Northern Europe attended early on. As their businesses grew and there was a similar interest from practitioners to learn more, they developed their own events. In 2013, I was asked to present at the second year of the Specsavers Clinical Conference (SCC) in Australia.

Some of the changes in optical education have come about because what we do has changed. Some of the skills that are now required to work effectively as an optometrist weren’t taught in the past, so of course practitioners have to learn new skills. There’s a lot of technology innovation in optics, and new instruments mean new skills and ways of working.

Gill Robinson, Specsavers’ director of professional training and development, has been involved with PAC since the late 1990s and is essentially the person who project manages and delivers it. Gill was also behind the development of MiniPAC regional events around the UK and Ireland, which started in 2014. MiniPAC has more than doubled the number of people who can access PAC events – in 2018, more than 2,000 practitioners attended a total of 12 events.

MiniPAC is no longer mini and I think will continue to grow!  The GOC are partway through conducting their Education Strategic Review, and although that’s focused on how optometrists and dispensing opticians qualify in the first instance, the direction of travel is about experiential learning. The pace of change in the profession means it’s very difficult for higher education institutions to track that change in real time, whereas in practice you’re experiencing it. So I wonder if there’s room to use events such as PAC and MiniPAC as outreach.

I believe we’ve achieved our original mission to help Specsavers play a leading role in continuing education and increase awareness of what we do in the wider profession, and we’re continuing to promote higher professional standards. Going forward, we want to move the profession on and get everybody to embrace change. So environment-scanning – trying to second-guess which skills we’ll require in the future – is more important than ever.”