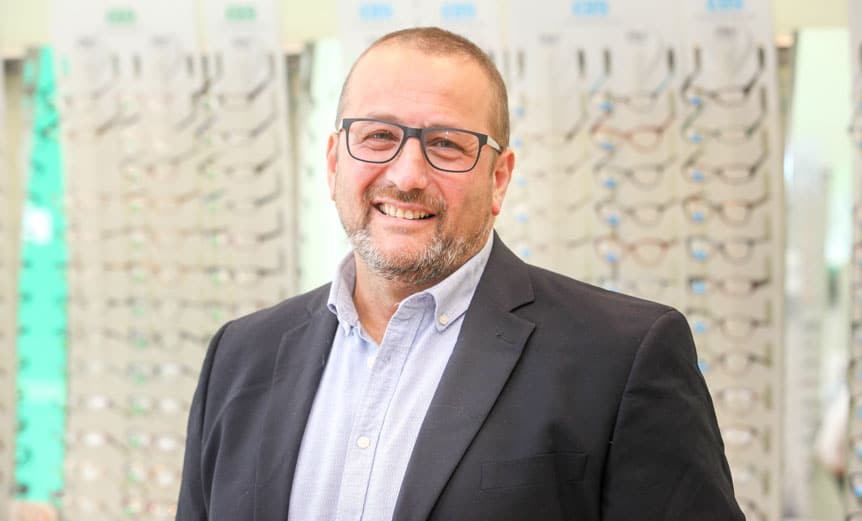 Stuart Ingleby has been an ophthalmic director for 30 years and involved in shared care schemes for more than a decade. He believes enhanced optical services (EOS) are vital for the sustainability of the industry.

He has a warning for the future: ‘Online suppliers outside of the UK’s legal system, outside of the Optician’s Act, will soon start to develop and give access to refraction online, which is available in the States at the moment, and that is a deep concern.

‘People will get a prescription made up online and the bread and butter of our industry will start to get nibbled away because you’ll have people working from very low-cost, non-high-street centres, so it’s not a level playing field. That is why we have to look at other elements of our delivery, and EOS is an integral part of that.’

Stuart opened his Blackburn practice  in 1988. This  doubled in size in 2018 and now has 12 test rooms – including one for contact lenses and two for hearing care. The practice’s  12 employed optometrists deal with around 1,000 clinical appointments a week. Of these, around 9% are EOS appointments.

Stuart says: ‘We’ve done pre- and post-operative cataract schemes for 10 or 15 years now. Three years ago, with the Local Optical Committee (LOC), we arranged an entire suite of EOS with the East Lancashire Trust. So now we have MECS, OHT, Glaucoma Referral Refinement, Visual Fields Refinement and Diabetic Retinopathy Screening.’

He says public awareness of the store’s services has grown and is now fairly high. ‘We’ve grown to have around 65-70% share of the Blackburn market,’ he says. ‘Over the past three years, people have seen what we do, both through in-store posters, leaflets and word of mouth.

‘Now we get MECS appointments triaged by GPs, pharmacists and the Referral Management Centre at the hospital,’ says Stuart.

He also says that getting involved with EOS is not only sensible, but profitable. ‘I get quite irritated with people who say EOS doesn’t make money,’ he says. ‘It jolly well does. Every time you do an EOS appointment, you get that amount of money. There are no charges, no VAT, no cost of sales – or very little. The people who say it doesn’t make money don’t get it. It absolutely does.’

At Blackburn, all optometrists are WOPEC-trained to deliver EOS. ‘That’s one of the pre-requisites of working here,’ says Stuart. ‘They build up, starting with cataract checks, then MECS, then OHT. I’ve also got three team members training to be Independent Prescribers and another three who are going on the WOPEC training for the Professional Certificate in Medical Retina.’

The optometrists are also trained in OCT (optical coherence tomography), as the store is planning to install a state-of-the-art Heidelberg device. ‘It’s the gold standard, the one that’s used by hospitals,’ says Stuart. ‘We chose it with one eye on the future. I ‘d like to use the same one the hospital ophthalmology departments use.’

Stuart believes that the store’s emphasis on training pays off in terms of staff retention. ‘It’s our responsibility as company directors to look after our optometrists,’ he says. ‘They’re highly-trained clinicians who value development and recognition. Our optometrists know we look to develop them. So we don’t lose many.’

Going forward, he believes that increased EOS provision will not only help to sustain the profession, but also raise its status. He says: ‘The effect of providing more medicalised services is that people see you more as a clinician than a specs seller. It raises our reputation, our professionalism, our credibility and our profile.’