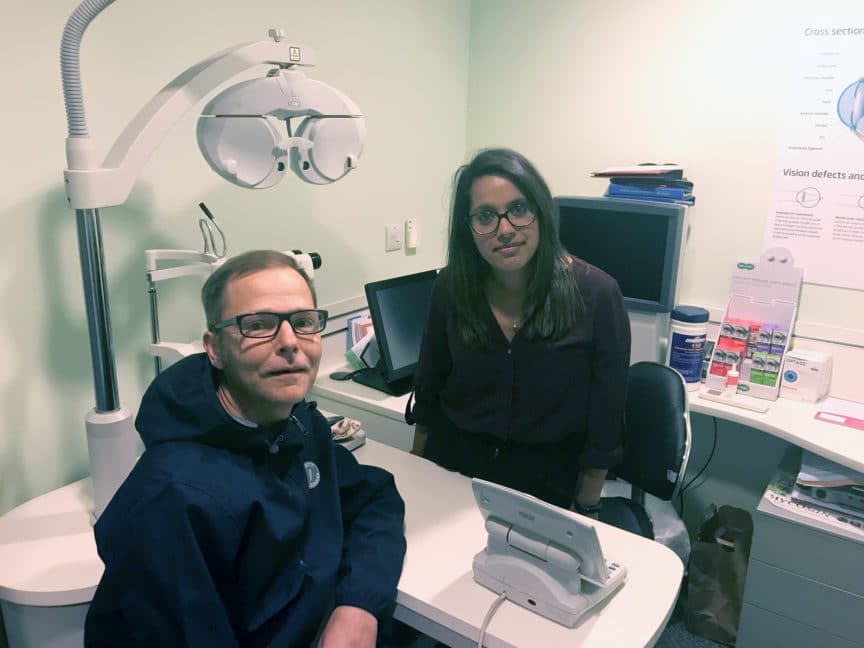 Peter Alcock, 50, was getting ready for work one morning, when he suddenly temporarily lost his sight in his left eye. ‘It was a total shock,’ says Peter. ‘The loss was instant; one minute, it was fine, the next I had to turn my head if I wanted to see what was to the left. I knew this needed checking, so I went straight to my local opticians in Derby.’

During his examination, optometrist Prina Ruparel used the store’s Optical Coherence Tomography (OCT) machine and detected something behind the left eye that left her in no doubt that an emergency hospital referral was needed. The Derby Specsavers store is the only opticians in Derby to use the advanced equipment, which creates a high-resolution 3D picture of the eye, including layers of the eye that would not normally be visible using traditional testing techniques. It means that the optician can pick up conditions or abnormalities that would otherwise be very hard, or even impossible, to detect using other techniques.

Prina says: ‘I could see something abnormal, and as the images suggested it was behind the eye, rather than inside it, I knew that I had to refer Mr Alcock to the Royal Derby Hospital, fast.’

Once at the hospital, an MRI scan showed Peter had suffered two mini-strokes without his knowledge, and a subsequent scan of his heart detected a number of masses attached to the valves, atrium and aorta.

Initially, it was thought that Peter was suffering from something called Carney Complex, an extremely rare genetic disorder affecting less than 800 people worldwide. However, the results from histology showed that the masses were in fact Papillary Fibroelastomas. While these growths were benign, it does leave Peter with an increased risk of further strokes.

Following his diagnosis, Peter spent three weeks on the Stroke Unit at the Royal as he was found to be suffering from atrial fibrillation and there were some discrepancies in his ECG. He was then transferred to Glenfield Hospital for open heart surgery to remove the masses and replace the valves they were affecting.

Fortunately for Peter, the operation went well, with no need for replacement valves, and he is now back at work full-time.

Although he still has some degree of heart failure, this is being controlled by medication and he will continue to undergo periodic monitoring in the future.

Peter works at Pennine Healthcare, where he extrudes tubes that are used in oxygen systems in healthcare settings, including the NHS. He checked during his stay, and some of the equipment used to treat him came from his company, possibly made by Peter himself.

Prina continues: ‘There is a saying that the eyes are the window to the soul. In truth, they are also the window to many conditions, and regular sight tests are an incredibly important element of any healthcare regime. Eye examinations are about more than just a prescription for glasses. Our optometrists are highly trained and skilled in detecting early signs of conditions that may otherwise be symptom free.’