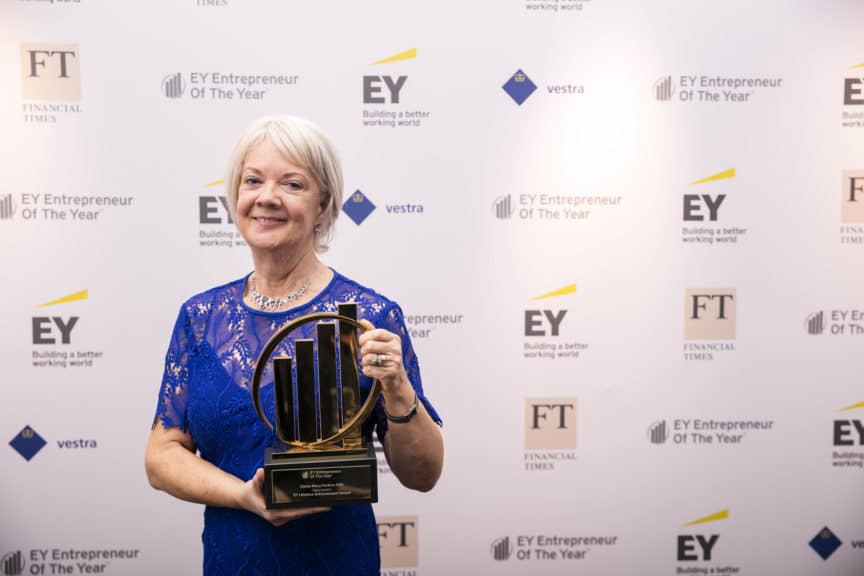 Dame Mary, who set up Specsavers with her husband Doug Perkins in 1984, was honoured with the accolade at the recent EY Entrepreneur of The Year UK Awards which recognises the spirit and contribution of exceptional entrepreneurs, and runs in 145 cities, in 60 countries worldwide.

The award is in recognition of her role in building the world’s largest privately-owned optical retailer and also her contribution to inspiring the next generation of female entrepreneurs through her patronage of Everywoman.

‘It is such an honour to receive the EY Lifetime Achievement Award. Doug and I started an optical business as soon as we qualified from Cardiff University, at a time when glasses were very expensive, which prevented some people from seeking advice about their eye health.

‘Since then we have stuck to our values of making eyecare affordable, with our unique joint venture partnership being a cornerstone of success.

‘All entrepreneurs are the back bone of the success of the UK and they put the Great into Great Britain.

‘The trick of the trade for entrepreneurs is to have a passion,’ she says.

‘Unless you’ve got that passion and knowledge of your customers and what they want, you might as well not do it. You have to think about that from the moment you wake up every morning, until the moment you go to bed.’

A leading figure in optometry and audiology, Specsavers’ revolutionary vision was to provide affordable, fashionable eyecare for everyone.

A qualified and registered optometrist for more than 50 years, Dame Mary’s role in the business includes driving customer service standards, championing values and shaping corporate responsibility. She is passionately involved with a number of national and local charities and was made a Dame Commander of the Order of the British Empire in 2007.