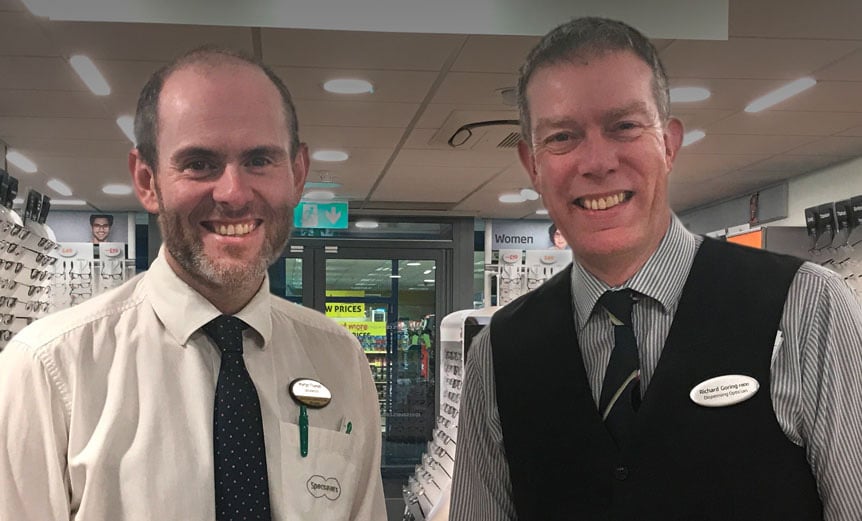 To mark National Apprenticeship Week (3-7 February), Spectrum spoke to Martyn Thomas and Richard Goring, joint venture partners at Specsavers Frome and Warminster. Both partners are on the senior leader Master’s degree apprenticeship – dispelling the myth that apprenticeships are just for school leavers!

Ophthalmic partner Martyn Thomas enrolled on the apprenticeship in January 2019, alongside business partner Richard Goring. He says: ‘Neither of us had a formal, recognised qualification in running a business. So when Paula Adamson [Specsavers’ partner talent manager] contacted me to ask if I’d be interested in an MBA [Masters in Business Administration], I jumped at the chance.’

Retail partner Richard Goring says: ‘I did ILM3 and Pathway [Specsavers’ partner development and learning programme], but I thought a formal qualification would enhance my leadership skills and business acumen.’

The apprenticeship, which is aimed at colleagues with significant management responsibility, leads to an MBA from Aston University. The course takes two years, plus up to six months to complete the end-point assessment. It is delivered through blended learning – a combination of virtual learning and university study days.

Richard qualified as a dispensing optician nearly 30 years ago, and has been retail partner at Specsavers Frome and Warminster since 2017. However, as he doesn’t have A-levels or a degree, he was initially concerned about the academic challenges of an MBA course.

‘I was quite daunted at the beginning,’ he says. ‘But not everyone on the course has a degree. I met people from lots of different businesses in similar positions.

‘I probably did feel at a disadvantage initially, but I don’t anymore, as I’ve passed all the modules I’ve done so far. I’m just pleased the apprenticeship gave me this opportunity.’

Both partners agree that the main challenge of the programme is time management. Martyn says: ‘A large element of the apprenticeship – 20% – is done in work time, so we both take a day a week to study. However, we’re still working on the business, so it’s not as if it’s completely separate. And a lot of the studying we have to do is to evidence things that we’re doing within the business, so actually that’s been a massive help to both of us, as it’s made us focus a bit more on what sort of things we should be doing.’

Richard adds: ‘You do need to give yourself a certain amount of hours a week to do the reading in your own time, over and above the 20%. But as long as you’re organised you can manage your time correctly.’

Despite the challenges, both partners feel that the programme is well worth the time and effort. Martyn says: ‘It gives you a much more rounded view of the business. It also helps you to analyse and reflect on the things that you’re doing. I’m now much more likely to make business decisions based on “head” – knowledge and facts – rather than “heart”. That focus on business performance hopefully then leads to increased profitability.

‘If you’re running a business and don’t have a recognised formal business qualification, it’s invaluable.’

Richard agrees. ‘Even in 12 months of doing the course, I feel I’ve improved the way I lead my businesses and deal with my teams,’ he says. ‘It’s given me more confidence. Both Martyn and I are now quite happy to stand up in front of all 45 team members and discuss our vision for the future – and the team’s been enthusiastic and supportive of these positive changes.

‘We progress a lot of our team members to do further qualifications, and we’ve got our own apprentices doing the optical assistant apprenticeship. And if our team members can see that their directors are also continuing to develop themselves, then I think that leads by example.’

Both Martyn and Richard – who are currently the only pair of partners on the programme – feel that doing the apprenticeship together has been an advantage. Martyn says: ‘I think there’s a real benefit to doing it at the same time, especially when you have multi-site businesses. For example, Richard can implement the changes we want to make in one business, and I can implement them in the other business at the same time.’

Richard agrees. ‘You’re doing the same modules at the same time,’ he says. ‘So you can reflect on what you’ve done and talk to each other about it, and it gives more validation to what you do in store.

‘We have quite ambitious plans for our two businesses, and a long-term view. Both of us doing the MBA only supports that long-term vision.’

In total, 18 colleagues are now on the senior leader apprenticeship, which was launched in September 2018. Start dates are in January, May and September.

Specsavers currently has 550 apprentices throughout the business. Around 250 are school leavers, while around 300 are enrolled on programmes from Level 3 team leader to the senior leader apprenticeship at Level 7.