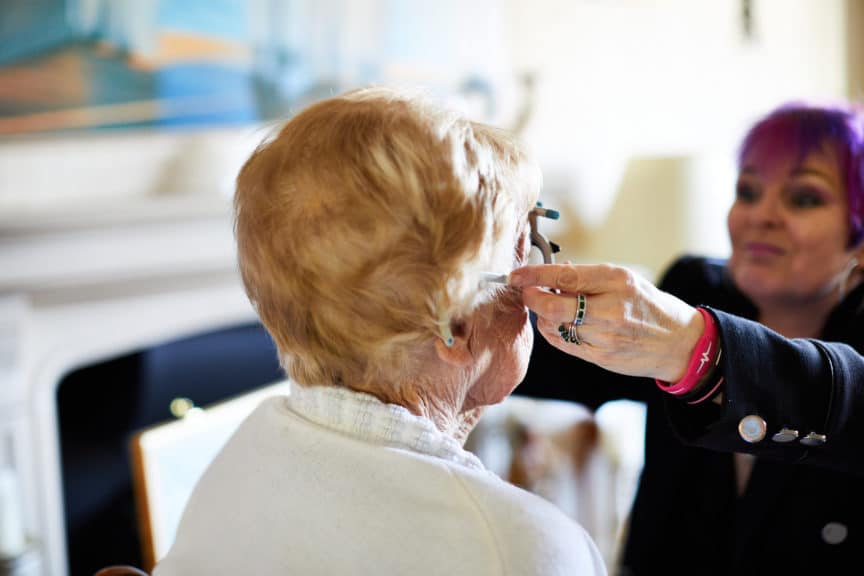 Domiciliary optometrist Nicolas  Hooks explains how technology is helping a new generation of patients’ eye tests in their own homes.

“Working in domiciliary really helps you to understand the social value of what optometrists can deliver. We help to preserve patients’ autonomy,promote self-actualisation and improve quality of life.

Domiciliary gives you a broader view of society. You get to meet some incredible people and hear some incredible stories. When you visit a person in their home, you see more of their life than just their eyes.

It’s very satisfying work because you really can make a difference – sometimes in unexpected ways. Recently I examined a patient whose lips were turning blue – it turned out to be carbon monoxide poisoning from an unserviced fireplace. And a few weeks ago I saw an elderly patient who’d been sectioned under the Mental Health Act because he was having hallucinations. In fact, he wasn’t mentally ill at all – he had very dense cataracts and was suffering from Charles Bonnet Syndrome [a condition that causes visual hallucinations].

There are a lot of myths surrounding domiciliary. That’s partly based on what it used to be like – in the past there was a lot of care-home work. But people’s views of the sector are beginning to change. There are a lot more individuals accessing care and services from their own homes, so we’re seeing more autonomous individuals.

Some patients have better outcomes from domiciliary examinations. Recently I examined a middle-aged woman with low-functioning autism who became incredibly anxious outside of her home. She benefited from a less invasive IOP [intraocular pressure] measurement and home environment for ophthalmoscopy. Her glaucoma is now managed and further disability has been avoided.

With an ageing population, domiciliary eyecare is a growing business. It’s profitable, and increasing productivity can make it more profitable. Managing downtime – the non-productive time between tests – is key. We’re aiming to reduce our time between patients to 50 minutes a day, using various measures such as smart scheduling. We forecast where patients are going to be and how many patients are going to be seen in a certain area, and the computer calculates the shortest possible route between them, using geographic information systems.

Being able to delegate non-optometric functions allows me to be more productive, too. Prior to working for Specsavers, I was running my own independent domiciliary practice, and the amount of hat-switching I had to do had an impact on productivity. These days I don’t have to do IT, marketing, frame choice selections or dispensing. I do what I’m trained for.

Increasingly compact kit and handheld technology has also had an impact on home visiting. The ICare tonometer, for example, brings IOP measuring to patients with cognitive impairment who shy away from the air puff test. I’ve been using an iPad for about five years. I use it as a reading chart and demo tool as well as a communication device – it’s like my Swiss Army knife.

While it’s true that technology has changed our work, it’s also made a huge change in our patients’ lives. In the past 10 years, I’ve seen a shift from the silent generation, who often sat in dimly-lit rooms for fear of the electricity bill, to the baby boomer generation who have choices their parents never had and are far more familiar with technology. They use mobile phones and online supermarkets and may choose a blended shopping experience, browsing frame styles online, which we later present in real life for varifocal measurements. It’s important to understand how the technology they use impacts them. For example, if they watch television via an iPad on their lap, that actually projects to a larger viewing angle than a 60-inch television screen three metres away.

Going forwards, it’s really important that the next generation of optometrists are aware of that social change and can talk the language of their patients. That’s why I was delighted to have a pre-registration optometrist shadow me for a day recently, and I’ve extended the invitation to two more.The value of domiciliary shadowing is that it gives pre-registration optometrists a different perspective and helps them put the work that they’re doing into context – giving patients autonomy and making sure they’re being all they can be.”

Nicolas Hooks is a Specsavers domiciliary optometrist and partner based in Bournemouth.