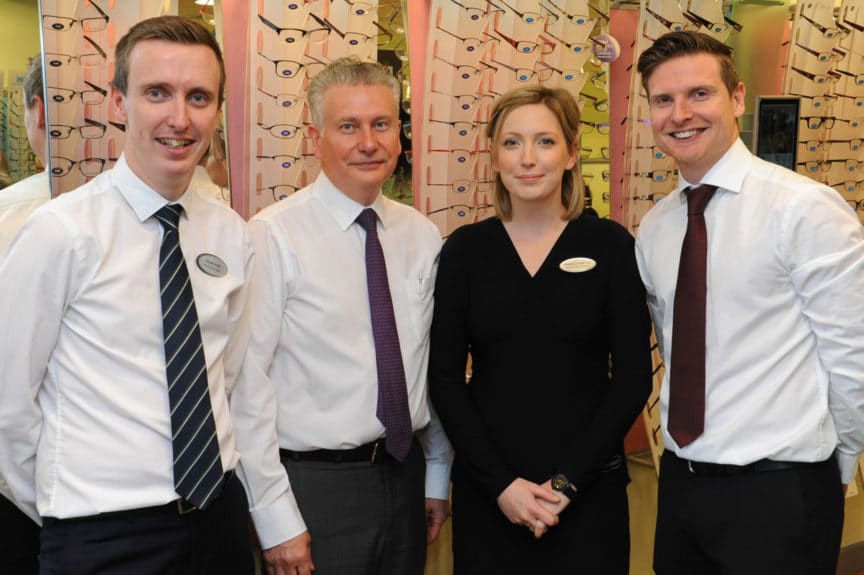 Optometrist Darren Smith (above right), together with his father, dispensing optician Nialle, is a director of three Specsavers stores – Leominster, Hereford and Ludlow. In addition to this father/son combo, there’s three more. Darren’s wife Nicole is also an optometrist and Ludlow store director, and his brother Kieran and sister Rebecca also work in-store.

‘Sunday lunches are pretty boring affairs if you’re not involved in Specsavers!’ jokes Darren. The family team are not afraid of saying what they think and Darren maintains that this has helped them develop their business.

With his background together with ambition instilled into him by his parents, Darren feels he was always destined to be an optometrist and director and set out to gain the right qualifications to achieve his goals.

As he didn’t want to hang on to his father’s coat tails, Darren alone negotiated the opening of a Ludlow satellite store to the larger Hereford one. ‘I did it without telling Dad because I didn’t want him to influence the process.’ He achieved his aim, with the store opening in August 2007.

‘With a good demographic that would suit the Specsavers ethos and dad’s experience as a director, we couldn’t go wrong,’ he explains. He joined the Hereford business in 2010 when one of the other directors retired.

Charity ethos
Across the three stores, staff are encouraged to do as much as they can to support local charities and Darren is very proud of the results. ‘It’s heart-warming to watch the way they work with each other. Whenever they do anything, the whole team turns up – everyone knows everyone.’

Darren would happily advise others to follow the same career path as him and is full of praise for the support he has been given both by his family and Specsavers. ‘It it’s a positive and forward-looking organisation and my career has given me so much. I love working across the three practices and I’d encourage anyone to go into optometry and directorship.’