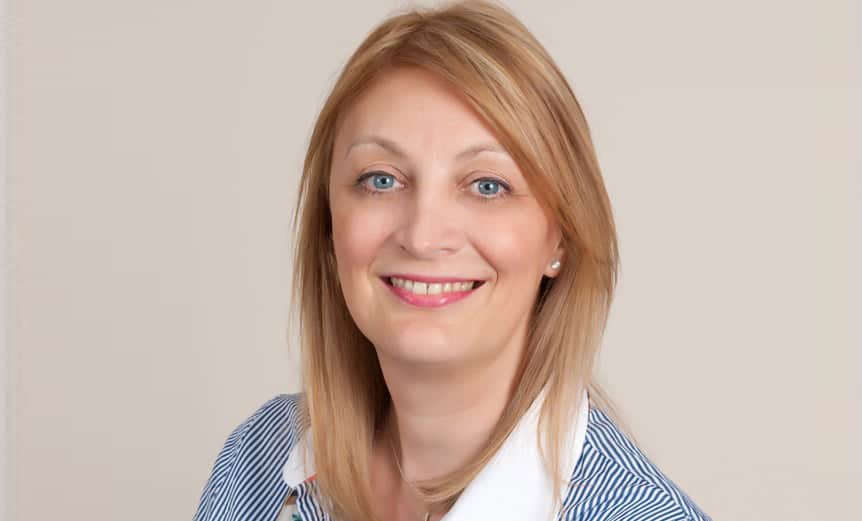 This month, Spectrum meets optometrist and store owner Dr Josie Forte, who tells us why the South West is a great choice for pre-registration optometrists.

As well as co-owning several  Specsavers stores and being a lead assessor for WOPEC (Welsh Optometric Postgraduate Education Centre), she is also a registrant council member of the General Optical Council.

Dr Josie started her working life in retail, spending three years as a manager at Sainsbury’s before following in her father’s footsteps and qualifying as an optometrist. She studied optometry at Cardiff University, alma mater of Specsavers founders Doug and Dame Mary Perkins.

She started her optometry career in hospital practice, practised briefly in New Zealand, then returned to the UK to run her own independent practice for several years.

In 2016 she graduated from Aston University with a professional doctorate in optometry.

Dr Josie says: ‘Many optometrists seem to spend all their time in the test room, but some people want more. I have my own business and am also privileged to work on some bigger projects beyond my stores. It really is the best of both worlds.’

She is passionate about the South West and keen to attract pre-registration optometrists to the region, where optometrist recruitment has traditionally been challenging.

She says: ‘The advantages of Plymouth are the magnificent outdoor lifestyle, a more laidback way of life, lower house prices than the larger cities and a reduced cost of living. You might earn slightly more and we can be a little more flexible with contracts – for example, you might get alternate weekends off to help facilitate the attractive outdoor life.’

For clinically-minded pre-reg optometrists, Plymouth has lots of opportunities. Dr Josie says: ‘We have a strong relationship with the REI (Royal Eye Infirmary), based in Derriford Hospital in Plymouth. We currently participate in optometry based diabetic retinal screening and glaucoma management schemes, an  Intra Ocular Pressure (IOP) referral refinement scheme as well as providing post-operative cataract care as well. We also offer Minor Eye Conditions Services (MECS) privately which offers patients an alternative to attending their doctor or hospital when they have symptoms or new concerns about their eye health.

‘Finally, in the South West you are likely to have more diverse pathology to see, simply because the population is, on average, a little bit older. Many optometrists find this more interesting and rewarding to help manage.’

Dr Josie says the opening of the optometry course at Plymouth University in 2011 has meant that recruiting pre-reg optometrists has gradually become easier.

She says: ‘Because the number of students qualifying has been increasing, this year we have had more success recruiting than in previous years, and are looking forward to welcoming six new pre-reg optometrists across the Plymouth stores this summer.’

In fact, the increase in numbers means she has had to persuade established optometrists, who had never previously mentored, to take on roles as supervisors.

The next challenge is persuading those who have relocated for their pre-reg year to stay on. Dr Josie says: ‘For some, it’s the first time they’ve been so far from their family. Some understandably want to go back home after the pre-reg year. However, we have had people who have put down roots in Plymouth after qualifying. They may not have come with the intention of staying, but when they get here they realise it’s an amazing place and make a new home for themselves.’