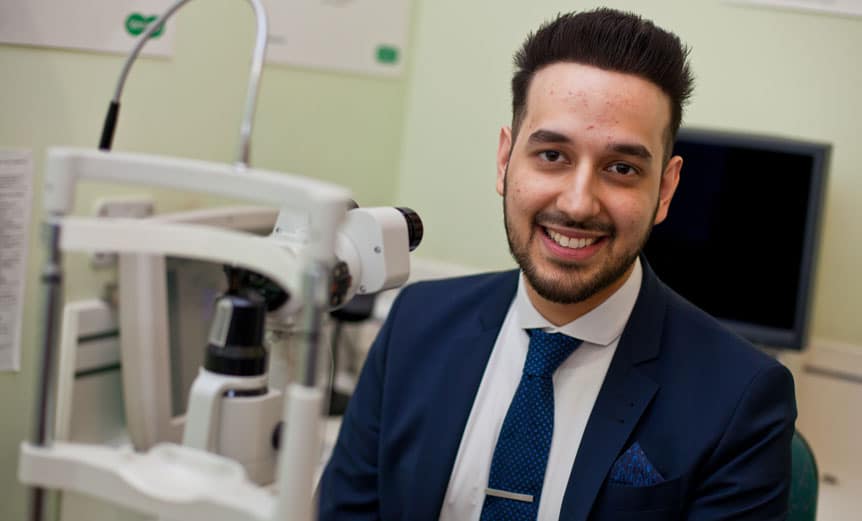 Hussnan Ejaz, ophthalmic director at Specsavers’ Dudley and Blackheath stores, explains how persistence and participation in local health care schemes are paying off.

Hussnan Ejaz, who joined Specsavers Dudley as ophthalmic director in March, says: ‘The schemes have been a game-changer for Dudley. I think it’s just going to continue to grow and be a massive success.’

Becoming the GP of the eyes

Dudley is on a roll. Since March 2018, the Specsavers opticians practice has been part of the Healthy Living Optical Practice (HLOP) scheme, which aims to improve accessibility to essential NHS services. Four employees completed training in order to administer the free services, which include help with smoking cessation, alcohol screening and NHS health checks. The store also built a new easily-accessible, soundproof room to use as a health clinic. The clinic is available seven days a week and accepts walk-in patients as well as referrals from GPs and internal referrals.

It’s been a game-changer for Dudley. I think it’s just going to continue to grow and be a massive success.

Hussnan says: ‘If you’re over 40, haven’t had a medical, haven’t seen a doctor for a while and aren’t on any medication, we’ll offer these free NHS health checks. They’re the same as you would get at the doctor’s – we’ll check height, weight, BMI (body mass index), blood pressure, blood sugars and cholesterol. We’ll generate a report for the patient and for their GP.’

He is full of enthusiasm for the scheme, which he believes is of huge benefit to the store as well as the community. ‘It gives the store a lot more credibility with Dudley residents. Locals see us as health professionals. We’re there to correct sight and supply glasses but there are other things we can do as well.’

According to the chair of Dudley Local Optical Committee (LOC), Shamina Asif, the new schemes were commissioned following the success of the HLOP scheme, as the CCG saw the potential in optical practices. Dudley LOC had persistent meetings with the CCG and secondary care, demonstrating the success of extended primary care services in neighbouring areas such as Walsall and Wolverhampton.

Hussnan says: ‘My business partner Gurdeep Dosanjh and I are both on the Dudley LOC and have helped to fight for these schemes. We’ve also had support from Specsavers NHS delivery managers, which has been helpful in securing them.’

With MECS services already in place in neighbouring areas, the new Dudley contract means that patients across almost all of the West Midlands will be able to use optical practices as their first port of call for minor eye problems.

Hussnan says the MECS scheme is going particularly well. ‘We’re really flying with MECS,’ he says. ‘Patients can walk in, give us a call or be referred from the GP or pharmacy. In the first six weeks we saw 77 patients with minor eye conditions. That’s 77 patients who would have potentially been seen at the hospital or GP surgery. For the patient it’s less time wasted and for the NHS it’s a lot of money saved, as it would cost the hospital a lot more than the £50 fee we get.’

The NHS funding is great news for the store. Hussnan says: ‘Now there’s a scheme available, GPs can refer to us, there’s more awareness and the system’s a lot easier too, as a report will automatically go to the patient’s GP. It’s just better patient care.’

In the first six weeks we saw 77 patients just on MECS. That’s 77 patients who would have potentially been seen at the hospital or GP surgery.

The Dudley team were able to hit the ground running when the new schemes launched, as all staff had already received appropriate training. Hussnan says: ‘We’ve done a lot of training and developed both sides – the clinicians and the front of house from optical assistants to receptionists and telephonists.

‘All our optometrists are accredited for cataract, glaucoma and MECS, we’ve delivered general EOS training to all colleagues. Some optical assistants  have been on a BTEC course as well. We have an EOS lead who’s done the BTEC training and it’s her job to manage the scheme in store.’

He is confident that the store’s investment in training is both appreciated by staff and attractive to potential new recruits. He says: ‘At interviews, we always tell candidates that training is open to them and that if they want to develop themselves further we’re always happy to support that.’

Hussnan and Gurdeep have helped to raise awareness of the scheme among local health professionals by attending GP engagement events and visiting GP practices and pharmacies. Hussnan says: ‘We give them leaflets provided by the Primary Eyecare Company [the not-for-profit company set up by the LOC to act as a lead contractor for optical practices in the area] and tell them that they’re more than welcome to send appropriate patients to us. That makes their lives easier as well.’

Gurdeep has helped to raise awareness among potential patients by visiting doctor and patient engagement groups, the charity Age UK, the Freshers’ Fayre at Dudley College, and even a local WI (Women’s Institute) group.

The Primary Eyecare Company has delivered leaflets and posters to all GP surgeries in the Dudley CCG area, and the schemes are promoted in store with POS (point of sale display products). The staff are on board, too, telling optical patients about the NHS schemes, and talking to health clinic patients about eye tests.

Hussnan is delighted with the successful launch of the schemes: ‘We’ve really pushed for these schemes and it’s rewarding to see them come into our practice. Community health care just seems to be in a better place.’