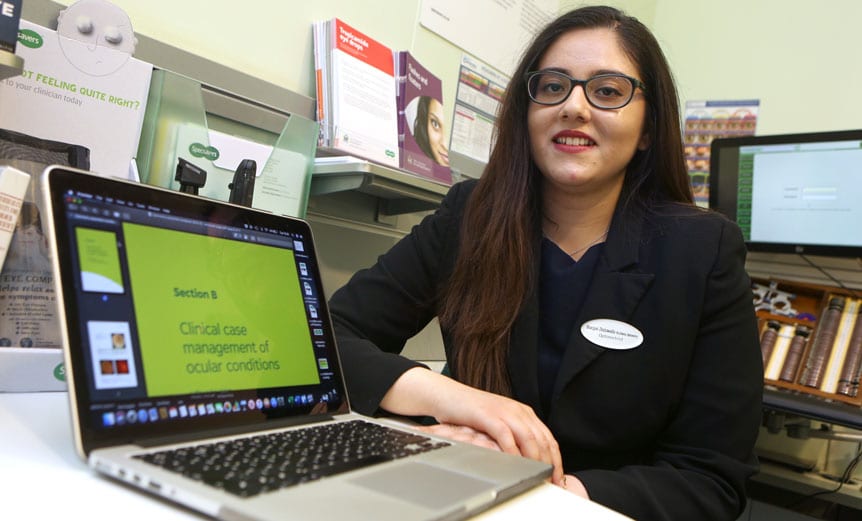 Optometrist at Specsavers in Daventry, Bhargavi Zinzuwadia, on the importance of the occluder to her every day practice.

It has been a little over a year since I became a fully qualified optometrist, and what a journey it has been. While I stepped into the world of optometry with the breadth of knowledge that I gained during my studies, the true challenge has been developing my experiences of managing a vast variety of clinical presentations.

In daily practice equipment like my Volk lens, ophthalmoscope, trial frame and cross cylinders are the norm. However, I have come to learn that it is often the most simple of tools that can be overlooked in clinical decision-making. One such example is my humble occluder.

There are a variety of clinical techniques we can use to investigate our patients’ binocular vision. The cover test is… one which could not be performed without my friend, the occluder.

As clinicians, we are presented with binocular vision-related scenarios on a daily basis. In many cases, practitioners prescribe solely on monocular and binocular balance refraction, alongside retinoscopy or autorefractor results. We can too easily overlook how a change in prescription may affect the binocular status of our patients.

There are a variety of clinical techniques we can use to investigate our patients’ binocular vision. The cover test is, of course, the most important technique – one which could not be performed without my friend, the occluder.

Cover testing enables us to differentiate between a heterophoria and a heterotropia. When performing this technique, I always ask myself ‘how will the cover test findings affect my management?;’ ‘Are there any other clinical tests I would like to perform?;’ and ‘Will I need to modify my refraction in order to manage the patient symptoms?’

An example of the types of lessons that I have learnt by performing a cover test with my occlude include when a mother presented with her 12-year-old child, concerned due to a drop in their performance at school over the last six months. The patient had not noticed any change in vision for both distance and near, and no other visual disturbances were reported.

Ocular health examination findings with a Volk lens were within the normal limits and pupils were reacting well to light, and the refraction results were negligible. However, I did note that when I covered the patient’s eye with my occluder to test monocular visual acuity, their response on letter recognition was very slow, even though no phoria or tropia was present in primary gaze.

I decided to perform the alternating cover test in eight directions of gaze and my patient mentioned vertical diplopia when looking right and possibly left. The alternating cover test did show a muscle under-action – right gaze than left gaze. Due to these findings, I made the decision to refer on an urgent basis as I suspected a cranial nerve anomaly.

Ophthalmological feedback confirmed my suspicions and the child had a superior oblique palsy due to a head injury that was sustained approximately six months previously. In addition, some degree of ischaemia was noted, with further tests near the mid-brain at the level of the inferior colliculus, which is the origin site for the cranial nerve IV which supplies the superior oblique muscle. The child also had positive signs of aphasia.

Had I not used my occluder to look at eye muscle movements, my management may well have differed.

Sometimes it’s the little things that can make a huge difference to a patient, like a little piece of plastic

Occluders come in a variety of forms. I like to use the opaque Speilman Occluder when examining children as it allows me to observe eye movements of the occluded eye, aiding the diagnosis of an ocular deviation.

In practice, the more commonly used occluder is the Romanes form. A millimetre scale is engraved on the handle that allows for the measurement of inter-pupillary distance, as well as interpalpebral distance, which may be useful when assessing the success of rigid gas permeable lenses or monitoring patients for ptosis. The occluder itself can also be used for the assessment of near visual acuity.

So as I hope that I have demonstrated, we may have access to many up to date bits of equipment in our practices today, but sometimes it’s the little things that can make a huge difference to a patient, like a little piece of plastic: my humble occluder. Why not take a moment the next time you occlude a patient, and just think of the conditions that can be diagnosed with it and what impact this could have.

Are you interested in an optometry career at Specsavers?