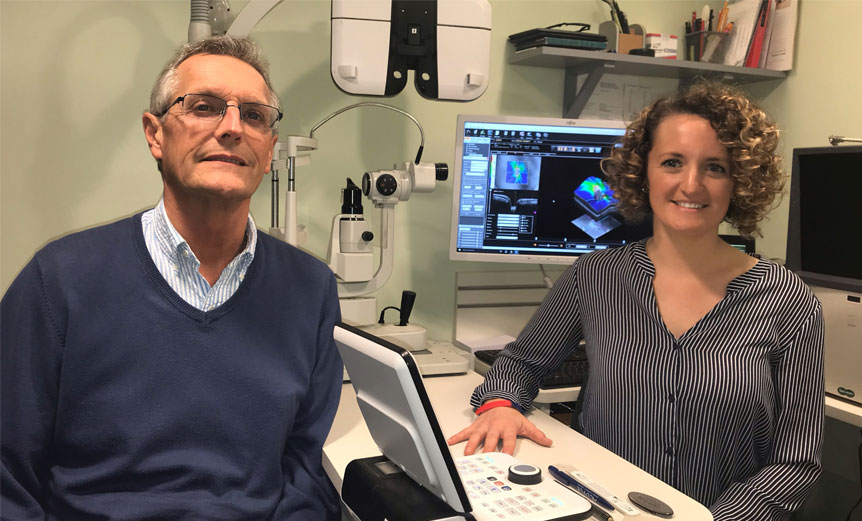 When 59-year-old Robert Brain visited Specsavers Ludlow for a routine eye examination he hadn’t anticipated that the trip would ultimately help to save his sight.

Mr Brain booked in for his routine sight test at Specsavers in the Bull Ring in July last year.  He hadn’t been experiencing any issues with his sight and so anticipated that he’d perhaps just need an updated prescription and a new pair of glasses.

However, following initial field tests and a thorough eye examination and OCT scan carried out by optometrist Sophie Wragg, it became obvious that all wasn’t quite as it should be.

‘After additional tests in store, Sophie called me to say she wasn’t happy with the results and was referring me to an eye specialist in Shrewsbury,’ comments Mr Brain. ‘I quickly got an appointment through and there, after further investigation, they confirmed I was experiencing the early stages of glaucoma.

‘It was a real shock. I’d not had any symptoms, there’s no history of glaucoma in my family, and so it had never crossed my mind that I could be suffering from it. Irreversible damage had been caused to my eyes, but if I’d left it any later this damage would have been worse – and could ultimately have lost me my sight.’

Fortunately, Mr Brain’s open angle glaucoma (slow onset) had been caught early and he was prescribed with eye drops to halt any further damage to his eyes. He’ll also continue to have regular check-ups at the hospital and in-store.

‘To be honest I didn’t realise the importance of eye tests,’ adds Mr Brain.  ‘As I hadn’t been experiencing any symptoms, I could have put off seeing an optometrist – had I done that, it simply could have been too late. I’d recommend everyone visits their optician regularly irrespective of whether they think they need new specs or not.’

‘Mr Brain’s story really does demonstrate how important it is to keep up-to-date with your eye examinations,’ says Ms Wragg. ‘Glaucoma is a progressive disease so the earlier the picked up the better, we’re just thankful Mr Brain came in to see us when he did.’