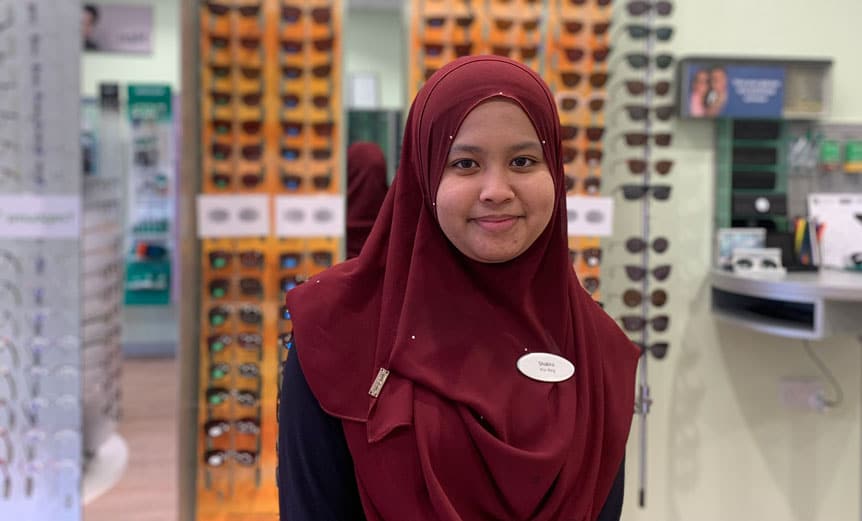 Pre-registration optometrist Shakirah Hanafi (pictured above) and domiciliary partner Nicolas Hooks explain how a domiciliary placement brought benefits to both of them.

In 10 years as a domiciliary optometrist, Nicolas had never had a pre-reg optometrist accompany him to experience the sector first-hand. But that all changed in March when Shakirah Hanafi did a placement with him.

Nicolas explains: ‘I’ve got a good working relationship with Shakirah’s store supervisor, Tim Finch, and as he was going on holiday, I suggested it would be good for Shakirah’s development to see a different side of the industry.’

He believes that domiciliary placements can help pre-reg optometrists get a broader range of experience. ‘For professional development I think it’s really good to get a breadth of experience in your pre-reg year,’ he says. ‘It’s a time to see how you can develop yourself.’

Nicolas, who gained his BSc in Optometry from Aston University in 1999, first experienced domiciliary work while working as a locum on the high street. ‘I decided it fitted my personality,’ he says. ‘I felt I needed a different kind of challenge, and domiciliary is nothing if not challenging.’

Overcoming those challenges, he says, is one of the most satisfying aspects of the job. ‘In high street practice you have all the equipment to support you,’ he says. ‘But in domiciliary you’re presented with a wider range of pathology, logistical challenges and you have to think on your feet.’

He also enjoys being able to oversee the whole experience of the customer. ‘It’s more joined-up,’ he says. ‘I find it more professionally satisfying.’

He says the placement was beneficial to him as well as Shakirah. ‘It’s always good to have somebody asking questions about why you do something,’ he says. ‘It helps you to reflect on your own practice.’

The placement was so successful, he has already extended the invitation to two other pre-reg optometrists in Bournemouth.

So what message would he like to pass on to others interested in domiciliary shadowing? ‘Come with an open mind and sensible shoes.’

Shakirah, 22, gained her BSc in Optometry from Cardiff University in 2018 and is spending her pre-reg year at the new Winton (Bournemouth) store.

She says: ‘When I first started at the store I said I’d be interested in working with one of the domiciliary optometrists, just to experience what it was like. So when my supervisor went on leave, my manager asked if I’d like to accompany Nicolas on home visits, I was really keen to do it.’

Although Shakirah was looking forward to her placement, she was also nervous. ‘I had a lot of worries as I wasn’t sure what to expect. I wasn’t sure if Nicolas would want me to do some of the tests.’ She was also anxious about having less equipment than she was used to. ‘I thought we’d have to do everything manually.’

Shakirah first accompanied Nick as he visited four patients who all have mobility issues: two people live at a care home and two in private homes. She recalls: ‘One patient in the care home was bedridden and had slight dementia; the other was in a wheelchair. One housebound patient had very swollen feet due to diabetes, so it was hard for her to get about. She lived alone and her house was very dark. The other housebound patient was in her 90s and also lived alone. I felt it was good that we could visit them and sort out their needs.’

Shakirah enjoyed seeing how resourceful home-visit optometrists have to be, adapting tests according to the environment. She says: ‘In the store we have lots of technology and we tend to stick to the same routine. But in domiciliary we had to adapt the tests to the patients we were seeing.

‘For example, a patient in the care home had a very high amount of prism in her glasses and Nicolas showed me how to neutralise the prism by hand, without using a focimeter.

‘One of the housebound patients didn’t have enough lighting in her house so we ended up using a reading lamp to assess her vision. It was very interesting and really made you think.’

Fortunately, the worries she’d had beforehand were unfounded. She says: ‘Nicolas told each patient that I was still learning and explained everything to me very thoroughly while doing each test. He was always open to questions, too.’

She feels her time in domiciliary was both interesting and worthwhile. She says: ‘You meet different people every day and really do make a difference to their lives. It’s very rewarding to help solve their problems and fulfil their needs.

‘I appreciated being able to spend a bit more time with the patients, have a chat with them and get to know them more. The two housebound patients both lived alone and looked very happy when we came in – they really appreciated us coming to visit them.’

She concludes: ‘What I enjoy most as a pre-reg is doing sight tests, interacting with customers and helping to solve their problems. I’ve always wanted to help in domiciliary so when I got the opportunity, I was so pleased, and I’m so grateful to have done it. I’d do it again if I get the chance.’