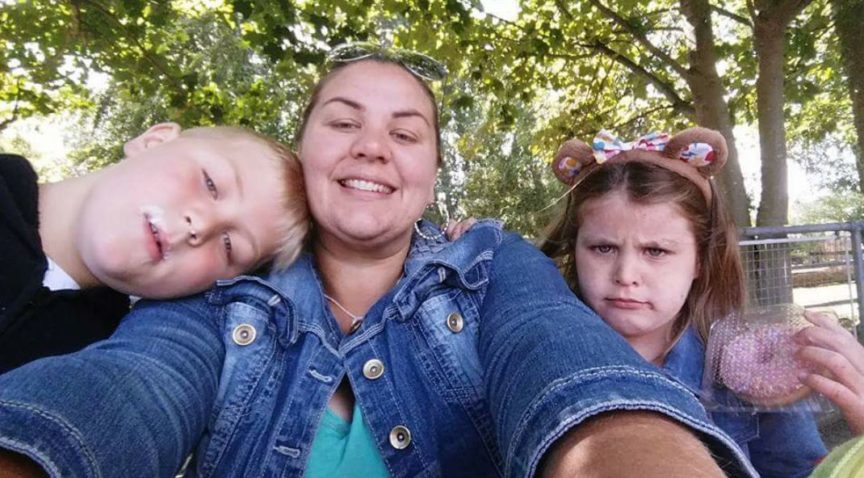 A trip to an optician has saved the sight of a mum from Birkenhead, who booked a test after weeks of struggling to focus in the mirror.

Stacey Hughes, 33, thought that her weeks of struggling to focus in the mirror and blurred vision was nothing more than a sign of
aging. ‘It sounds silly,’ she says, ‘but whenever I was doing something simple like focusing on my eyebrows, my vision was blurred.’

And when the problem started to impact on her driving, Stacey booked an eye test the same day. As a support worker, helping disabled adults to live independently in the community, Stacey has to drive every day. ‘I was driving and my eye was itchy, so I rubbed it. Suddenly everything went very blurry. It was dangerous, so I decided to make an appointment straight away.’

Chris Neilson, optometrist at Specsavers Birkenhead and Wallasey stores examined Stacey’s eyes and says it quickly became clear that
everything wasn’t as it should be: ‘I started to go through the usual tests, and it was clear that the problem was in just one eye and wouldn’t be fixed with a glasses prescription, which she’d resigned herself to.

‘I took a look at her retina. You’d expect to see it as a flat shape, with all blood vessels easily visible at a glance. Stacey’s was clearly misshapen which obviously rings alarm bells.

‘It was an unusual case, though, as patients with retinal detachments tend to experience a sudden onset of symptoms, which can include flashes and floaters disrupting vision. However, after a second opinion in-store, I was confident enough that Stacey was suffering from a detached retina.

‘Obviously, because the retina was coming away from the eye, without contact with its blood supply the risk to the sensitive retinal tissue being damaged was high, so time was of the essence for Stacey. We got in contact with the hospital and let her know that
they’d be in touch to confirm an appointment time very soon.

Stacey adds: ‘Chris at Specsavers was fantastic. He was very calm and reassuring, and arranged an appointment at hospital for me within 48 hours. I was grateful that he’d recognised the problem and organised for me to be seen by a specialist, but reassured that he hadn’t dramatised the situation or tried to frighten me.’

The ophthalmology appointment not only confirmed Christopher’s diagnosis of a detached retina, but also that it was very severe case. Without urgent surgery, Stacey could have irreparably lost her vision in her left eye. She was told that she could even be
facing three serious operations and 12 months without driving, making it impossible for her to work.

Stacey says: ‘I was asked if I’d taken a bump to the head – I had seriously banged my head about 18 months earlier when the car seat slammed into me as I was manoeuvring it and I ended up with an indentation on my skull. We can only assume it was that knock which brought on the problem.’

Fortunately for Stacey, the outlook began to look brighter as soon as she was seen by Professor Wong and Dr Lara Sandri at St Paul’s Eye Hospital in Liverpool. ‘They were absolutely fantastic,’ she says. ‘Professor Wong took a lot of time and care to listen to me. He explained to me exactly what he was going to do to my eye and how the operation would work. ‘I’m so lucky to have had such great care from both Specsavers and St Paul’s.’

The professor made the decision that one operation – a silicon buckle – could reattach Stacey’s retina and save the sight in her eye. A silicon band was attached around her eyeball, compressing the retina against the back of her eye and forcing it to reattach.

The operation successfully recovered around 40% of the vision in Stacey’s eye, which is likely to improve with time. She’ll return to her optometrist to be given a prescription for glasses which will help to support her eye through recovery, and encourage further improvement.

She says: ‘The kids were quite nervous when I returned home wearing an eye patch, and we spent that week which was half term unable to leave the house, but the outcome was just as we’d hoped.’

What’s more, the speed with which she bounced back from that operation meant that within just two weeks Stacey was allowed back to work and back on the roads. She is even now able to go trampolining, something she often does with her clients at
work.

Stacey, who hadn’t had an eye test since school, says that she has been telling all her friends and family to book an appointment to get their eyes checked. ‘I could have lost my vision in my eye at any time. I’m so glad that I made that appointment. Every time I explain what happened to friends or family I hear the same response: “I’m going to get my eyes tested, too”. I’ve learnt an incredible amount and will never take my vision or eye health for granted again.’

Optometrist Chris adds: ‘I’m so pleased that Stacey has recovered so well’.