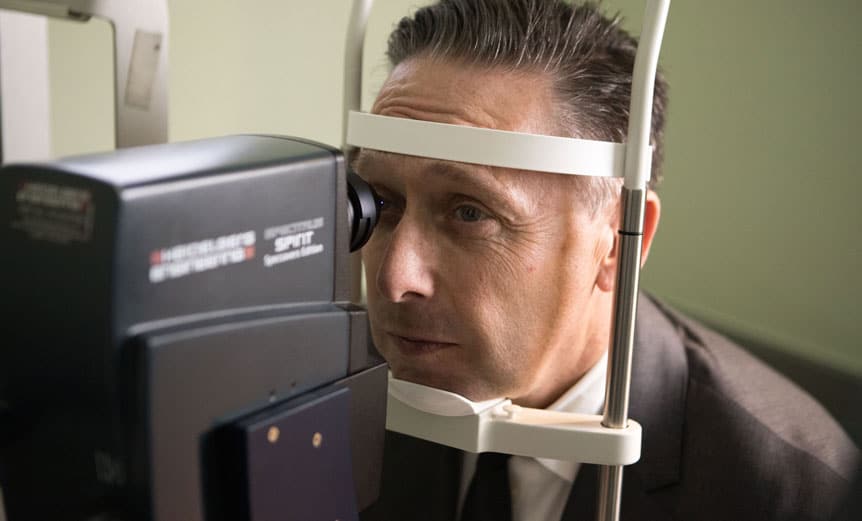 The CEO of the Road Haulage Association has teamed up with Specsavers and road safety charity Brake to remind drivers of the importance of regular sight tests, after he himself was diagnosed with glaucoma. According to previous Brake research, 1.5m UK licence holders have never had their eyes tested¹.

Richard Burn​ett has worn glasses for around seven years and had recently become aware of changes to his vision. His Specsavers optometrist was keen to investigate this further during his recent appointment at the Tottenham Court Road store. Richard says: ‘I discussed my concerns about my peripheral vision with Avmeeta Virdee, who discussed my eye test and OCT scans with me.

The Optical Coherence Tomography (OCT) machine – now in 600 Specsavers stores across the UK – is Specsavers’ most advanced eye examination  Avmeeta explains: ‘The OCT image I took of Richard’s eye enabled me to analyse and interpret the data at a much more precise and accurate level.’

On review of the image, Avmeeta detected what she suspected to be the first signs of glaucoma, a condition often described as the ‘silent thief of sight’ that affects more than 64 million people around the world. A follow-up appointment with an ophthalmologist confirmed this to be the case.

Richard says: ‘My job requires me to drive daily and help to ensure that the UK’s haulage industry is compliant in all matters of road safety. Good vision is vital on our roads, and it is important for me to lead by example. I hope my own eye health story will prompt people to book their sight test, particularly if it’s been over two years since they last saw an optician.’

An estimated 700,000 people are living with glaucoma in the UK, with half not even realising they have it. It usually occurs when naturally-occurring fluid inside the eye does not drain properly, leading to a build-up of pressure. This can then cause damage to the optic nerve and nerve fibres from the retina. While the condition cannot be reversed, it can be managed – but early detection is key.

Richard, like many others, was lucky to have the condition spotted early and is now being closely monitored to ensure sight loss is prevented in the longer term and he maintains healthy vision.

Avmeeta says: ‘The good news is glaucoma can generally be treated effectively if detected early, and in most cases, daily eye drops are used.’

‘With the most common form of glaucoma like Richard’s, visual loss is initially very subtle, affecting mainly the peripheral vision, which can make it harder to notice. Many don’t realise there is anything wrong with their sight which is why regular visits to the optician are essential.’

Karen Osborn Chief Executive of the International Glaucoma Association (IGA) concludes: ‘We regularly hear from people who have permanently lost sight to glaucoma because of late diagnosis. The earlier treatment starts, the more likely that someone will retain useful sight for life, so it’s great that Specsavers is urging drivers to have their eye health checked this Road Safety Week.’