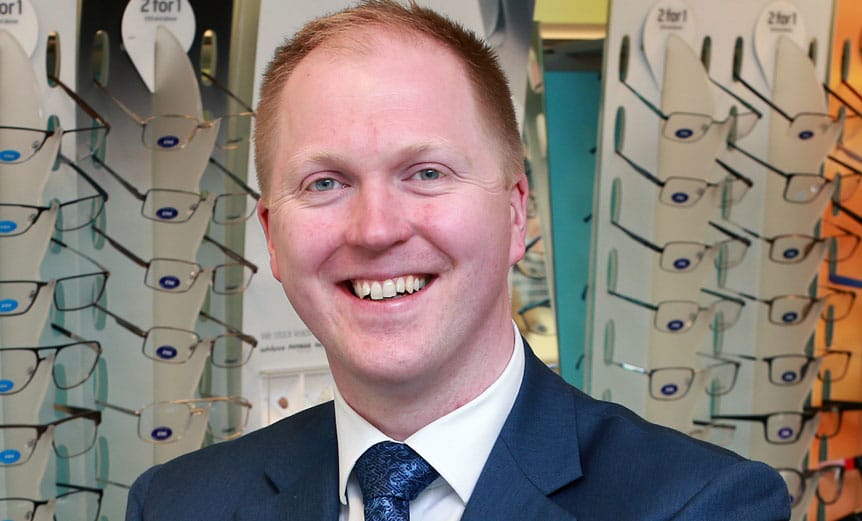 I’m the optometrist and clinical director of the Cameron Toll and the Morningside Specsavers practices. I also work in the Princess Alexandra Eye Pavilion as a part-time paediatric optometrist. As I have my independent prescribing qualification, I was asked to help with the triage hotlines while the nurses are being re-deployed because their skills are needed elsewhere. They have asked us to step up. We are also doing more in the acute referrals clinic alongside nurse practitioners.

It is challenging and exciting. I feel like there is still a good safety net and the support is there. My colleagues in the hospital are really well skilled and we work together as a team, although spaced two metres apart.

As the news of the coronavirus spread, we knew that it was quite serious. We were screening patients in our practices when we were taking bookings, asking them whether they had been unwell or had a cough. There was anxiety at the start, when we were advised that the Scottish Government wanted to stop all opticians from offering routine eye tests. When the Chancellor announced the furlough scheme we were very, very grateful for it. We were delighted to be able to send most of our colleagues home knowing that they were safe and their jobs were safe.

It was stressful trying to make sure we had the right outcome for our colleagues. Because everything was changing, every time we came up with a plan there was something different that came up the next day, which meant we had to re-plan everything. My role was to guide colleagues, to keep them safe and to make sure the patients were protected. To be honest, I ended up having a migraine.

We established a system in our practices where one testing room was set up as a triage room. Anyone who had any concerns about their eyes phoned into the store. There was a voicemail message that explained the system and then the optometrist would take the call in the test room, create a file and go through the history and symptoms. Hopefully we would be able to rectify the problem there and then over the phone. We ended up introducing an iPad that had Face Time so we could actually see the patient as well.

If we decided we needed to see the patient, we scheduled a time for them to come to the practice, unlocked the door, gave them gloves and a mask, let them come through and then

took images of their eyes. The optometrist would have a visor, a mask, an apron and gloves. They would try to treat the patient and get them out of the practice within around 20 minutes maximum.

The challenge is that the longer you spend with the patient, the greater the risk of infecting them. It is a balancing act.

“These disasters can really show the best and the worst in people. We need to keep alert but keep kind. This time can be defining”

From this week (14 April), all community optometrists in Scotland will be doing video or telephone consultations rather than in-person appointments. Anybody who needs to have a face-to-face consultation will then be referred to a secondary care hub called an Emergency Eye Care Treatment Centre. The idea behind the hub is that all the optometrists have independent prescribing qualifications and you also have adequate PPE and waste disposal.

In Edinburgh, the decision was made to use the Lothian Optometric Teach and Treat clinic in the hospital. They will have volunteer independent prescribing optometrists working there alongside doctors. I will be working there on days when I am not working in the other two practices or the hospital.

The vast majority of the cases we saw in practice were genuine emergencies. We had one person with a chemical burn to his eye after a gardening accident. We had two patients with anterior uveitis. Today I had a community nurse who was having severe headaches. She had meant to have her eyes tested for the past six months but hadn’t got around to it. It turned out she had uncorrected astigmatism. Sorting her out with glasses will mean that she is able to serve more patients. It is really an invaluable service that optometry offers.

There are many times where a patient will tell me their symptoms and I have a good idea of what is wrong with them. In normal life, you would do these tests to confirm your hypothesis. When it comes to situations like the coronavirus, if you have an 89-year-old patient who is experiencing visual symptoms the risk of them potentially dying from coronavirus is probably higher than the risk of treating them without seeing them in person. We have to try and manage these things over the phone as much as possible. It can be life and death in these situations.

It wasn’t a hard decision for me to continue seeing patients, but I can understand why it would be. I have one or two close friends who are immunocompromised, nd I actively encouraged them to close their practice. The risk was too high. From my perspective, I knew that if I wore the appropriate PPE, applied infection control measures and screened patients, then we could continue to deliver eye care. It is important that we do. The consequences of patients not receiving that care is that either they potentially have a serious sight-threatening condition that isn’t addressed or they go seeking help in places that would be much better avoided, such as an accident and emergency department.

I see myself as an NHS worker and a clinician. I have an independent prescribing qualification and I know that with the training I have received and the equipment that I have, I can do a lot of good. I can get to the root cause of conditions and concerns about people’s eyes as fast, if not faster than a GP would.

When everything blows over we are going to become very busy. The worst scenario would be that patients go and burden an already stressed NHS. There is a lot that we can support the NHS with. There’s an awful lot of people out there who need support and monitoring and the NHS just does not have the capacity to provide that service.

The personal impact: “The kids are still singing happy birthday when they wash their hands”

My wife and I have always had a bit of anxiety about the risk of bringing COVID-19 into the house and infecting my 5-year-old daughter. She was born very prematurely so she has lung disease and she is at risk. My wife works in accident and emergency. We set strict rules in the house. For example, we would wipe down our phones and remove our shoes and bag at the door. We would put our clothes straight in the washing machine on a 60-degree wash and then go up and have a shower before coming down to talk to the family.

Ironically, I do have more time to myself because we are less busy in terms of the volume of patients. I am really enjoying being able to be home with my family. I usually come home just in time to read the children’s bedtime stories. Now we take long walks as a family and have dinner together at the table. It’s quite sweet; the kids are still singing happy birthday when they wash their hands so you can hear them singing in the background. My kids are loving the home school aspect of it and spending more time with their parents. Finn, my son, turned eight during lockdown on 25 March. He had a birthday with just the four of us and he actually had a great time.

Managing how much news you watch on the television is important. Initially, when everything was building up to a crescendo, I started to notice that I was watching the news and the kids were walking past soaking it in. I started to restrict what they were hearing. I also realised how important it was to curate what I was hearing. Don’t let yourself get too bombarded with negativity. When it is coming from every channel it starts to get overwhelming.

It is important that when the dust settles and everything goes back to normal, you can look back at how you behaved and be proud rather than ashamed. These disasters can really show the best and the worst in people. We need to keep alert but keep kind. This time can be defining.