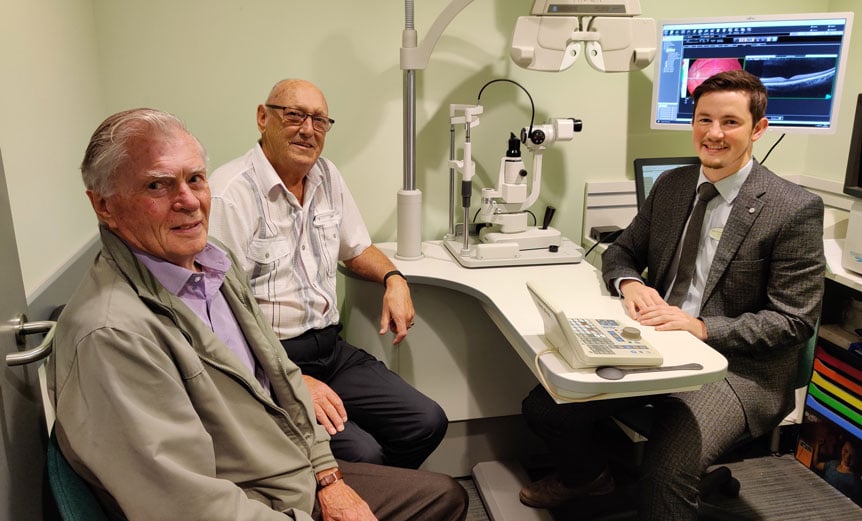 Two men from Ledbury have undergone potentially life-saving surgery after an optometrist helped to diagnose the same condition within weeks of each other.

Brian Poole, aged 80, and Keith Bullock, aged 72, each visited Specsavers after they experienced temporary sight loss in one of their eyes. Both men described their symptoms as like a shutter coming down vertically into their field of vision. On both occasions, optometrist and store director, John Roberts, immediately made referrals to Hereford County Hospital with cases of Amaurosis Fugax.

Amaurosis Fugax is a symptom of an underlying condition. Those suffering from the symptom often experience vision loss in one or both eyes, sometimes experienced as like a curtain descending over their vision. Usually, sight loss only lasts for a few seconds or minutes, and is most commonly caused by a blockage in the carotid artery.

John says: ‘Brian and Keith visited the store within a few weeks of each other with the same symptoms. Amaurosis Fugax is usually an indicator of something more serious, and in both these cases, it was a blocked carotid artery, which put them at high risk of stroke. I’ve never seen a case of Amaurosis Fugax before, so it was highly unusual to then have two in the space of a few weeks. It shows that you should never ignore any symptoms or problems with your sight, as they can indicate an underlying issue with your health.’

Brian and Keith underwent a series of tests at the hospital, and as suspected were both diagnosed with a blocked artery, which if left untreated could have proven fatal. After undergoing surgery to clear the blockage, they are now on medication to minimise the risk of it happening again.

‘I am so grateful to John and Specsavers,’ says Brian. ‘He referred me straight away. The sight loss was very odd, as it only happened on a couple of occasions. It lasted for about one minute and only affected one eye. I was a little shocked about the potential severity of the diagnosis, but the doctors were great, and I had an operation to clear the blockage the same week. It’s all sorted now, and I’m really pleased that I did not delay a trip to Specsavers. I’d encourage anyone who experiences a change in their sight to visit the opticians straight away.’

Keith had a similar experience and adds: ‘I initially thought that I had something in my left eye – I went totally blind for a couple of minutes. It was like a roller shutter had come down. My wife had a look but couldn’t see anything in my eye, so I decided to go straight to Specsavers where John referred me immediately to hospital. My artery was 99% blocked and I was at high risk of stroke. I feel really lucky that it was picked up and was I able to access treatment swiftly before suffering from anything more serious. I’m now on the mend and want to thank Specsavers and the doctors who treated me.’

‘We’re really pleased to hear that treatment has gone well for both Brian and Keith,’ says John. ‘It really is important to have regular eye examinations. We recommend having your eyes tested at least every two years, unless you have concerns about your sight, in which case it is advisable to book an appointment sooner.’

Research published by Specsavers and charity the Royal National Institute of Blind People (RNIB), shows one in five people will live with sight loss in their lifetime despite at least half of all cases being avoidable1. The statistics also show that 300 people in the UK start living with sight loss every day.

The optometrists at Specsavers Ledbury have accreditations in glaucoma and minor eye conditions (MECs). It means the store can offer eye health services to help manage a number of eye conditions allowing more people to be treated in store rather than having to go to their GP or hospital. Anyone experiencing symptoms such as pain, redness or flashes of light in their vision can access these services.