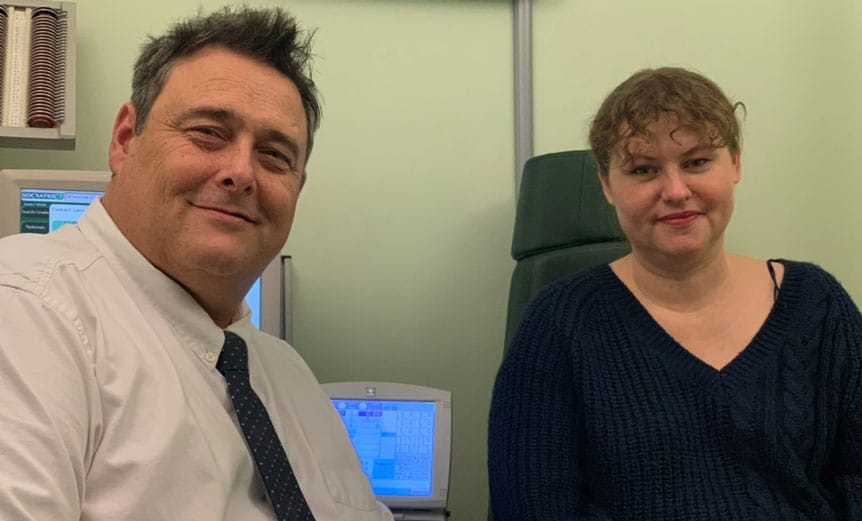 Nicola Ferdinand, 41, a mum-of-three from Langtoft, went for a routine sight test in Bourne, where the optometrist immediately found a worrying anomaly in her eye – a slightly discoloured optic nerve.

She was examined by store director and optometrist Neil Stradling, who says: ‘Our new OCT is hospital-grade equipment which produces a structural scan of the eye. Nicola’s scans showed a black circular shape around the optic nerve in her left eye. From experience, this is often the sign of a much more serious problem in the head or brain that manifests itself as a problem in the eye, so I immediately referred Nicola to hospital.’

Nicola went to Peterborough Hospital for further tests, where an MRI revealed that Nicola had a possible meningioma tumour in her brain. She was sent to the specialist clinic at Addenbrookes Hospital in Cambridge for further scans to confirm this and was diagnosed with an Optic Nerve Sheath Meningioma on her left nerve, as well as three other meningioma tumours around her brain.

‘It was a total shock,’ says Nicola. ‘I wasn’t expecting anything so serious. I’m hugely grateful to Neil at Specsavers – without his quick actions and referrals it could have been a lot worse.’

Nicola received radiotherapy treatment for six weeks to stop the optic nerve tumour from growing any further and to help relieve the pressure on her optic nerve which prevented her losing her sight.

‘The radiotherapy was successful in treating the optic meningioma, but in the process, it damaged the nerve so I have now lost some peripheral vision,’ explains Nicola. ‘With the other three tumours, I am having yearly MRI scans to check that they aren’t causing a problem.

‘I would encourage everyone to go and have their eyes tested. It helped to pick up an anomaly in my eye in the early stages which allowed me to get treatment.’

‘We’re very pleased to hear that Nicola is on the mend and her prognosis is good,’ says Neil. ‘It was a life-changing diagnosis for her and our very best wishes go out to her and her family.

‘I would echo Nicola’s encouragement for everyone to make sure that they are having their eyes tested regularly or to book in as soon as possible. It could be life-saving.’