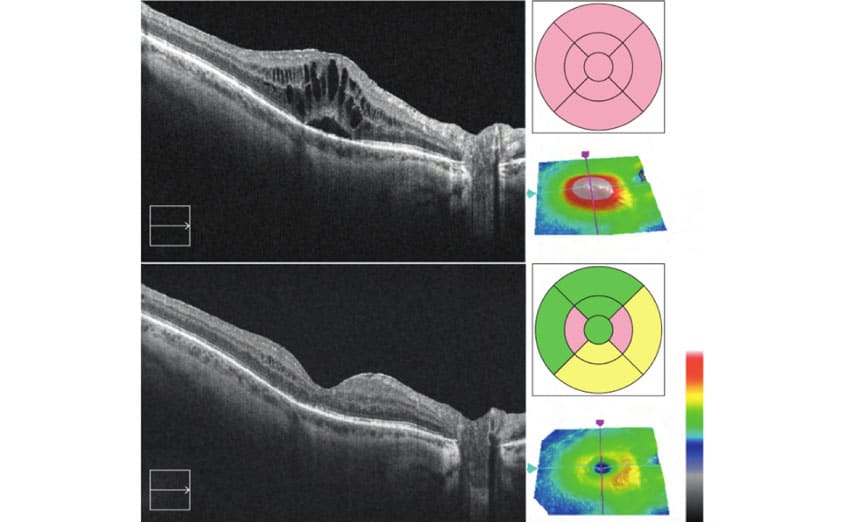 Craig Bell, director of Specsavers in Berwick-upon-Tweed, Northumberland, explains why his practice’s new state-of-the-art OCT device was worth the investment.

Craig, a dispensing optician and contact lens optician, says they’ve never looked back. ‘OCT is an absolute must now,’ he says. ‘The uptake has been phenomenal. One week nearly 40% of our customers had a scan.’

The store charges just £10 for OCT, which is available as part of an enhanced sight test. But the service is proving so popular that Craig believes the investment will pay for itself within a couple of years.

What’s more, he says the trust and goodwill generated by the service has led to an increased customer spend.

‘We found our conversion rate increased dramatically when we got the OCT,’ he says. ‘Customers felt they’d got a great service and were comfortable with the results.’

The store prepared for the launch of the gold-standard equipment with a strategic marketing campaign.

Craig says: ‘The marketing department created some adverts and artwork, and Specsavers’ trading director Tim Orton helped us get the message out that we have OCT, via articles in the local newspaper and on our website.’

The campaign paid off, with customers coming into the store asking for OCT. ‘It really took off,’ says Craig. ‘People come in saying, “I’ve heard about this 3D eye scanning machine…”’

Colleagues also promote the service when eye tests are booked on the phone or instore. Craig adds: ‘We started by advising certain people [to have OCT], but we found it was so beneficial that we expanded our scope, and now we offer it to anyone over 30. And if people under 30 request it, we’ll do that for them as well.

‘We talk about the option to have OCT at the time the appointment is made. When customers come in, if they’re hesitating, we talk them through how quickly the scan is and the benefits of having it on their records to look back on. Their optometrist also talk them through their scan in the examination room.’

He says the whole team is very much on board. ‘Once colleagues started using it and seeing the fantastic detail it gave them, they became really passionate about it,’ he says. ‘I think it’s definitely helped with the added interest it gives to their job. All the staff are interested, not just at optometrist level, but across the board. It’s fascinating to look at the back of the eye and see things like a macular hole.’

Before the device was installed at Berwick, customers needing an OCT scan would be faced with an expensive and time-consuming trip to Newcastle (63 miles south) or Edinburgh (57 miles north).