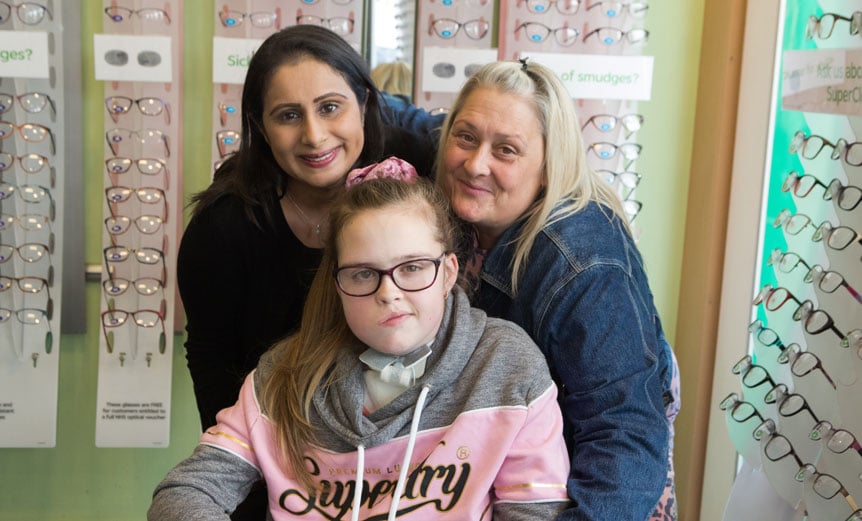 This Brain Tumour Awareness Week (October 26 – November 2) a mother and her daughter are urging everyone to ensure they have regular eye tests.

Millie Garbutt was 10 years old when she went for a routine eye test at Specsavers in Croydon and the optometrist noticed an abnormality during the examination. Within the hour, Millie and her mother, Emma, were on their way to St George’s Hospital for an MRI and within the week, Millie underwent an 11-hour operation to remove a life-threatening brain tumour.

Following the operation, Millie spent four months in intensive care, and a further year in hospital. The operation, while successful in removing 99% of the tumour, left her paralysed on one side of her body and affected her ability to speak.

‘The surgeon who operated on Millie told me that had we waited one more week before having the operation, there’s a chance Millie wouldn’t have made it’, says Emma.

Four years on, Millie and Emma are now ready to share their story.

Emma says, ‘Millie was complaining of headaches that week so I’d taken her to the GP to see if anything was wrong and they weren’t concerned. It was a couple of days later when she began vomiting clear liquid that I got really worried.

‘Millie was due for her sight test so I took her along for one that weekend and that’s when the optometrist Nirisha Patel delivered the news that would change everything for us.’

Nirisha explains, ‘I noticed that Millie was very sensitive to the light I was using on her eyes as part of the examination.

‘What I found was really concerning. Millie’s examination showed signs of papilledema, which is when the optic nerve at the back of the eye becomes swollen. In some cases, this could be the result of a brain tumour. We were able to capture images of the swelling to confirm the finding.’

Common symptoms of papilledema include visual disturbances, headaches and nausea. ‘

Nirish adds, ‘After I saw this papilledema, I called Emma aside and gently explained I’d picked up an abnormality of concern and that I would be referring Millie immediately to hospital.’

‘I was completely in shock when Nirisha told me’, says Emma. ‘Millie had always been a healthy girl and I couldn’t believe what I was being told. When the team at St George’s told me that Millie’s MRI was showing a huge brain tumour, I just wanted to collapse.

‘Apparently, it may have been growing since Millie was aged around one year, and had been growing with her as she got older.’

‘I am so grateful to Nirisha and the Specsavers team for their professionalism. I can’t thank her enough. She and Mr Stapleton at St George’s saved my daughter’s life.

‘I would urge every parent to take your child for an eye test. Don’t ignore it or put it off – it only takes half an hour of your life and the consequences for not doing it could be dire. I’ll be forever thankful I took Millie.’