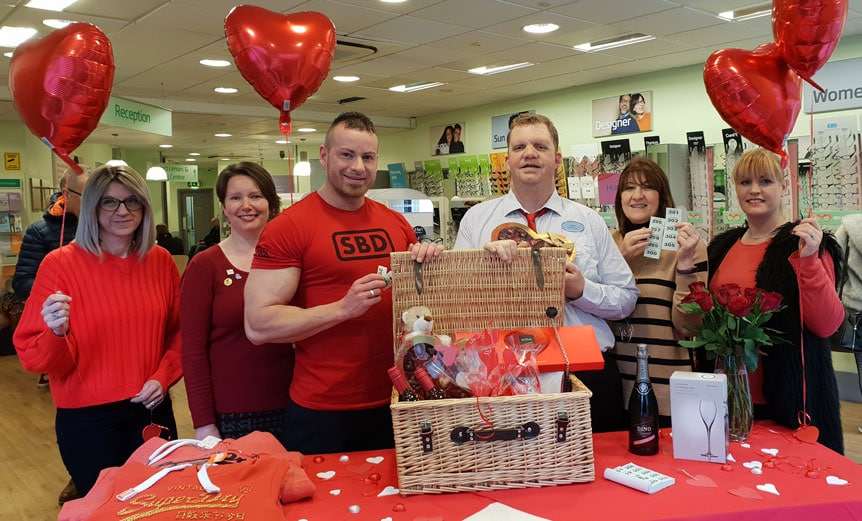 A big-hearted team member at Specsavers Cheltenham has launched a fundraising campaign to help buy a defibrillator for the local community.

Lab assistant James Tombs, 36, launched the ‘Hampers for Hearts’ campaign to help raise £1,800 to buy the life-saving device, to be installed outside the store on the spa town’s High Street.

To date, James has raised around £700 by selling raffle tickets for his first hamper, containing prizes donated by local businesses and customers. The draw will take place on Valentine’s Day.

He came up with the idea of raising money for a defibrillator after doing a first aid course via the store. He then personally visited every shop on the High Street collecting donations for the hamper.

James says: ‘I’m so grateful for the support so far with the “Hampers for Hearts” campaign – thanks to everyone who has been so keen to help. The next hamper we’ll be working on will be for Mother’s Day, with more coming throughout the year.’

James joined the Cheltenham store in 2017 as part of the GEM (Going the Extra Mile) Project – a Gloucestershire scheme that helps people dealing with circumstances that may make it hard for them to find work.

James, who has a learning disability, works in the lab. He was unable to read or write when he joined the store, but has made incredible progress.

Retail director Melanie Brackstone says: ‘When James first started, he was cleaning and casing the glasses in the lab. Because he couldn’t read, he couldn’t recognise the right cases for the designer glasses, so the team decided to put the correct case in the tray for him so he didn’t feel worried or as if he was constantly asking questions. They weren’t told to do that – they just wanted to support him. They then continued to support him as he became part of the team, working to tight deadlines and high standards.’

Emily Ashman, the store’s PR coordinator, liaised with the GEM Project to find a group for James to help him learn to read. For the past six months he has been going to the local library once a week for a reading programme, and can now read words of up to five letters.

Melanie says: ‘Now that James is reading, he’s able to do more than just clean and case glasses. For example, we have a list of appointments of people collecting glasses, and James goes through and pulls all of the jobs for the next day and makes sure they’re ready for the customers. He can also type up the list of jobs going across to our other Cheltenham store. He’s even taking part in social media and writing posts to promote his fundraising campaign. He’s very keen to do more, learn different skills and broaden his horizons.’

Currently four of the 45-strong team are from the GEM Project. Melanie says that initially some effort was required from the whole team in order to support their new colleagues, but the team were quick to get on board.

She says: ‘We had to change the way we were thinking and what we were doing, work with them, support them and understand their limitations. But now it’s just who we are and what we do. I can’t recommend it enough.’

The long term benefits to the store have been incredible, she says. ‘It’s been revolutionary, the difference it’s made to us, embracing disability and understanding that everyone has different strengths. The ethos of the store is totally different now – it’s a caring, nurturing environment with a great sense of teamship.

‘James is always upbeat, always really pleased to come to work, always looking for what can he do to help. And he only ever talks positively, so you can’t help but respond in the same way. Having someone like James around, striving to work and do well, has shown the team how valuable it is to everybody to have a good job. He is a massive asset.

‘There is a huge range of training and support and development going on in the store, from two people who have retrained as audiologists and an optometrist who has just attained advanced qualifications in glaucoma to an apprentice who qualified with us when she was 17. The guys from the GEM Project fit into the mix nicely.’

Find out what happened next…

The benefits of hiring people with disabilities…