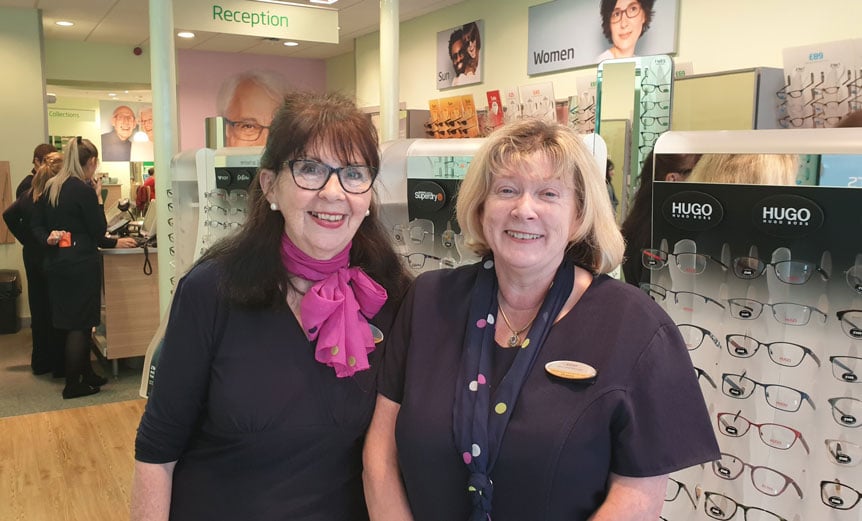 An Aberdeen opticians’ two longest-serving staff members are planning to celebrate an incredible 60 combined years in the job – and neither is ready to retire any time soon.

Manager Gilly McDonald has worked at the Specsavers Aberdeen store – one of Scotland’s largest opticians – for 29 years, with office manager and close friend Maggie Matthews not far behind on 28 years.

Maggie enjoyed a 70th birthday bash thrown by colleagues earlier this year, having started at the Union Street premises in 1991. She now works two days a week.

Gilly, 63, works four days a week, having started at the store in 1990 when it was still part of the former BHS, also in Union Street, and had a much smaller footprint.

They’ve both seen huge changes across the past three decades – both to the staff and the store itself which now encompasses over six floors – but neither wants to stop working.

The energetic pair agree that they love their jobs too much and would really miss their colleagues.

Gilly says: ‘I was originally a secretary in the oil industry and came across the job opening purely by chance. I thought it would be great to do it for a while – and I never left! I got to know the customers really well and made some amazing friends.

‘It’s been amazing to see the business grow – the contact lens department in particular has grown incredibly since I was first part of it. But I think there’s much more to come with the building being able to support a big space.

‘Maggie and I of course go way back, and we try to get lunch together as we just don’t get the time to chat when we’re at work and it’s such a big store.’

In her spare time, Gilly loves spending time with her grandsons Alfie, 3, and Alexander, 7 months, and enjoys theatre, music, and socialising.

Maggie has seen the store transform its record-keeping from manual paper filing in big cabinets through to harnessing digital technology for more efficient working and better service.

She says: ‘When we first started, I was full-time and Gilly was part-time, doing just one day a week. Now it’s reversed! But we remain great friends and love catching up when we can.

‘Back in 1991, the store director Peter Beaton was the only optometrist and I worked on the shop floor doing dispensing and other jobs. I now look after accounts, cash, and invoicing.

‘Looking back, I thought I might have retired before now, but that’s just not been the case – I still find the job really rewarding and I don’t see an end in sight. Everyone here is wonderful and I love what I do.

‘The store has just grown and grown in that time. Initially, it was really just the ground floor and the basement with private flats above. The flats were then taken over and we expanded up the way, with the lab moving upstairs.’

Starting off in a small basement office, Maggie manually looked after the store’s administrative processes in the pre-computer era, before it expanded to over six floors with a large team of admin staff.

She divides her time between work, ballroom dancing, swimming, and looking after her six grandchildren. The fit septuagenarian has even undertaken the Kilt Walk event for the last three years, in the process raising much-needed funds for various charities.

Store Director at Specsavers Aberdeen, Dave McGinty, says: ‘Maggie and Gilly are vital to the team here – their knowledge and energy is incredible. They’re also both very popular with all the staff, and we’re very lucky to still have them.’