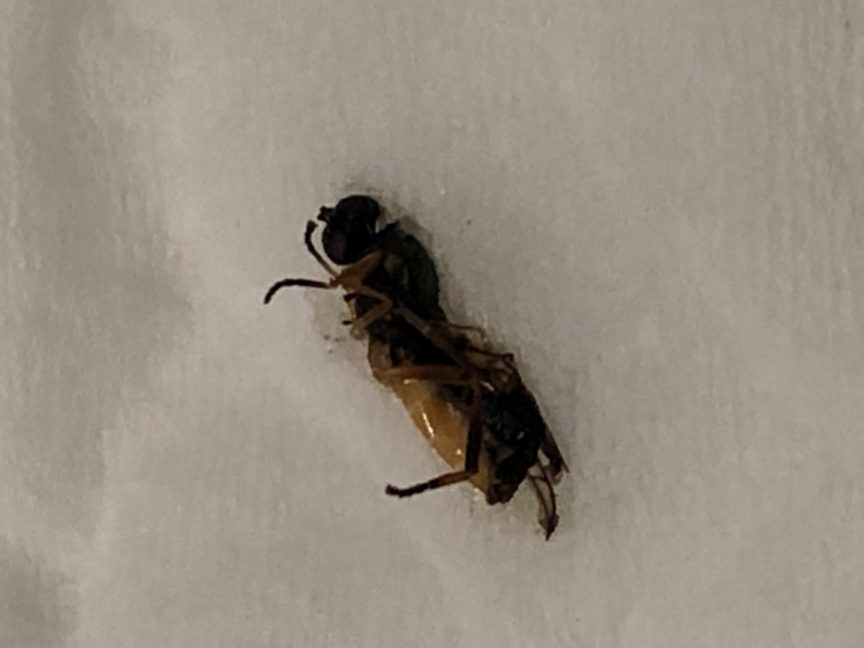 I was surprised to see how a large fly like that could get stuck inside the eye.

A Leicester man thought the lasting irritation in his eye might have been from where he rubbed it. But the slit lamp revealed a fly the size of a pinkie fingernail

Siddhant Majithia, an optometrist working in Specsavers in Leicester city-centre store described his treatment of a patient who presented to practice with a fly the size of a pinkie fingernail tucked beneath his lower eyelid.

Siddhant adds that following lockdown he saw an increase in ocular injuries related to DIY, including patients with small pieces of metal embedded in the cornea.

However, the fly he found lodged beneath a regular contact lens patient’s eyelid was a first: ‘This is the most unusual anterior eye case I have seen in practice. ‘

‘I was surprised to see how a large fly could get stuck inside the eye. Looking through the slit lamp, it looked even larger than it was,’ he said.

The patient presented at the practice around midday after a fly flew into his eye while walking earlier in the day.

He received an emergency appointment to assess a foreign body sensation that was troubling him.

Further tests by Siddhant revealed that his vision was fine but the eye that the fly flew into was slightly red.

‘He was unsure whether or not the fly was still in there. He thought maybe he had rubbed the eye a little bit or caused an abrasion,’ Siddhant said.

To further investigate the cause of the irritation, Siddhant performed a full fluorescein examination of the interior eye.

‘After I got Michael to look up and pulled his lower lid down, I spotted the fly tucked just under the lower eyelid. It was the size of a fingernail in length,’ he shared.

Siddhant used a cotton bud to move the fly away from the cornea and removed the fly using a pair of tweezers.

He advised the patient to get some over-the-counter antibiotic drops to reduce the chance of infection.

‘The patient returned for a follow up examination and we were glad to see that the eye was completely fine, there were no signs of infection and he was feeling 100% better.’