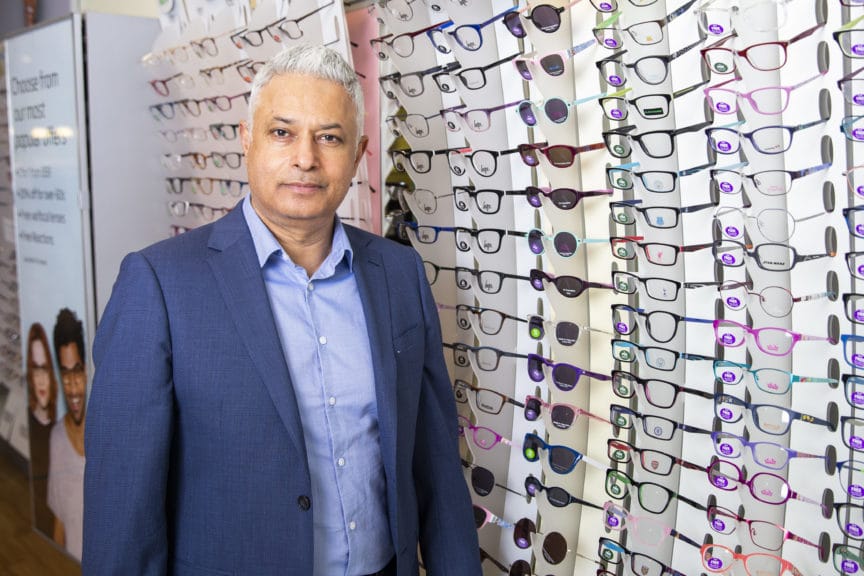 Specsavers store partner, Ravi Bhardwaj, has been recognised for 35 years of service. And, as one of the company’s first recruits back in the early 80s, Ravi is also proudly Specsavers’ first ever optometrist and longest serving ophthalmic director.

Ravi’s journey with Specsavers began before founders Dame Mary and Doug Perkins started the business on a ping-pong table in their spare room, after a change in UK regulations allowed professionals to advertise their products and services for the first time.

‘After 35 years of service to his community and to Specsavers, he has become a much-admired father figure in the store and in Reading, caring for and developing the skills of hundreds of optometrists and optical employees.’ Doug Perkins

Now, 35 years on, Ravi (61) is a store partner in Specsavers Reading Broad Street, Earley and Woodley, and looks back fondly on his time with the company, which he said, has allowed him to achieve so much and become a part of his local communities.

Ravi says: ‘I can’t believe how quickly the 35 years have gone. I remember asking my sister to help me type out my C.V. 10 different times ahead of sending it out to employers after graduating from Glasgow Caledonian University.

‘Next thing I know, I was called by Doug Perkins in response to a job vacancy looking for an entrepreneurial optician and invited to interview for the role at his home office in Guernsey – and that’s where he and Mary told me about their vision for Specsavers.

‘One month later, I’m staying in a hotel in Bristol with Doug and an architect, organising the opening of the first ever Specsavers store on Bristol Bond Street.’

Although he was excited, Ravi was also nervous at the time. Not only was it his first job out of university, but it was also a new approach to optometry on the high street at the time.

‘It was a big learning curve. Doug and I were working closely together on this store – and we were working non-stop to get the business off the ground. It was a massive effort. He’d come and stay almost every weekend and help me with testing and running the business.

‘It was tough, but it was really exciting. The local community welcomed an opticians that offered expertise at value for money. From then on, I knew that I wanted to open more stores and that this was a long-term career for me.’

After two years in Bristol, Ravi was offered the opportunity to open up a store in a location of his choice. He opted for Reading due to family ties in the area and a promising reputation as an up and coming town.

10 years after this, he went on to open Specsavers Earley, followed by Specsavers Woodley five years later.

He says: ‘I couldn’t be more grateful for my time with Specsavers. Being able to open a number of stores in Reading and the surrounding areas over the years has really allowed me to build a life and feel a part of the local communities here.

‘It’s been a pleasure getting to know our customers each day and it gives me the feeling that I belong here.

Ravi is also grateful for the business experience he’s gained.

‘I have to say, Specsavers has been at the forefront of everything I’ve achieved. I’ve been allowed to grow my businesses from seeds to plants and I’ve had the support I needed along the way. There’s always been training available for different career paths and they’ve helped me always put employees first – that’s really important to me.

‘Without them, I wouldn’t be where I am today.’

Ravi is proud that his teams have won awards and accreditations over recent years, with the Reading Broad Street team awarded a local retail award, recognised as a Platinum Employer and Lab of the Year by Specsavers internally.

‘I’ve got the best teams working with me and I couldn’t be without them,’ he says. ‘The last year during the pandemic in particular has been incredibly tough, but we’ve got through it as a family.

‘They’ve all looked after each other and gone the extra mile for our local community. They’ve shown me that when people need you the most, you need to be there – and they were there. Now, we’re feeling really optimistic about the future.’

Ravi has celebrated his 35th anniversary alongside his team and was congratulated by the Perkins’ family – even enjoying a video call with Specsavers CEO John Perkins. Ravi said when lockdown restrictions ease and some normality resumes, he’s looking forward to a round on the golf course.

‘I don’t tend to have much free time. But, when I do, I like to play golf. I’m looking forward to getting back onto the course when I’m able to again – I don’t think my handicap will be 18 anymore!’