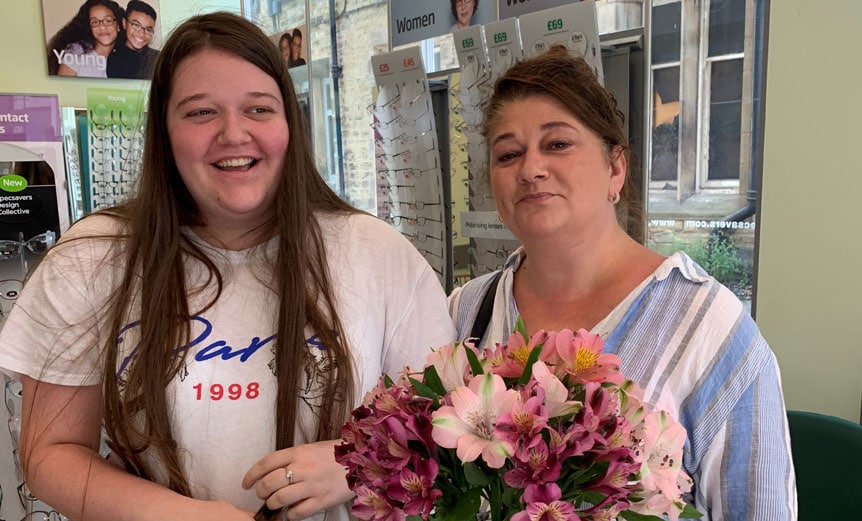 An optometrist in Skipton has helped spot and refer a young customer to hospital after finding swelling of the optic nerves on the back of both eyes through a routine test.

Ellie Harrison, 19, (pictured above, left) had been in to Specsavers with her mother for an eye test, with no headaches or other concerns having been reported. When optometrist, Pam Whiteley, looked inside Ellie’s eyes, she noticed an extremely serious swollen optic nerve in both eyes.

Swelling of these nerves can be a sign of raised pressure in the head and can be caused by a number of things from relatively minor issues with fluid pressure around the brain to more sinister conditions like brain tumours.

Pam, comments: ‘Ellie seemed like an entirely happy and healthy youngster, it wasn’t until we examined her that it became clear that there was a need to refer Ellie to the local A&E department for further investigation immediately. Ellie’s mother, Jane was obviously shocked and anxious at this news, so it was important to be supportive and talk them through proceedings.’

After attending the hospital Jane Harrison, comments: ‘We went in to the store about a week later with flowers and a card for Pam as a thank you for picking up the problem. Ellie’s condition arose due to fluid around the brain, however after an initial lumbar puncture and drainage procedure it should be treatable with tablets.

Pam, concludes: ‘Ellie and her family were amazed at what can be found out about your general health from what can be thought of as just a “simple eye test”. They were really grateful to have access to examinations on the high street and have since been spreading the word to encourage more people to attend regularly.’

The optometrists at Specsavers Skipton have accreditations in glaucoma and minor eye conditions (MECs). It means the store can offer eye health services to help manage a number of eye conditions allowing more people to be treated in store rather than having to go to their GP or hospital. Anyone experiencing symptoms such as pain, redness or flashes of light in their vision can access these services.