Kellianne Hoskin, an optical technician from Bodmin, has been awarded the highly respected Arnold Sinclair prize from the Master of the Worshipful Company of Spectacle Makers at a prestigious awards ceremony at Apothecaries’ Hall in London.

The prize, including a £250 cheque, was awarded for achieving the best performance in the year one written exam for the optical technicians’ diploma course.

Kellianne was joined at the ceremony by her very proud mum who has worked with her at the Specsavers Bodmin store since 2015. She says: ‘I started working at Specsavers Bodmin in 2009 as an optical assistant while I studied Zoology at university.

‘The diversity of roles at the store made a career in optics really appealing and so after graduation I went back full-time. I’ve always had a fondness for maths and physics so working in the lab was a great fit for me.

‘Thanks to the directors, Jo and Carl, I’ve been able to do the diploma and really advance my career.

‘I was genuinely surprised to receive the letter saying I had won a prize for my written exam. The ceremony and trip to London was very special and I’m so pleased mum came too. She’s always inspired me to do my best.’

The Worshipful Company of Spectacle Makers is the oldest optical body still existing in the world, having been founded by Royal Charter nearly 400 years ago. Over the centuries they have been responsible for upholding quality and encouraging better vision, for a better life.

Today they are a nationally approved awarding organisation whose qualifications are specifically designed for optical support staff. The company’s members themselves come from all walks of life, across the whole range of optical disciplines, audiology and many other professions. The Company says that new members are always welcome. 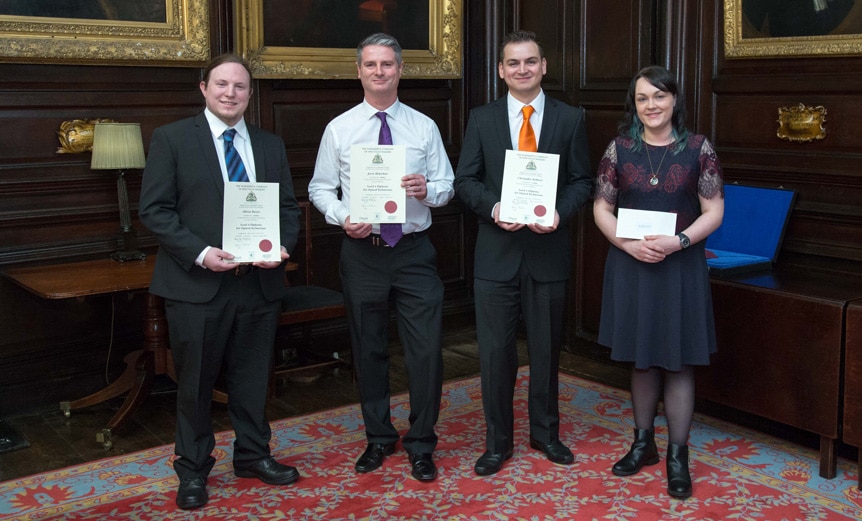 The Master Spectacle Maker, Felicity Harding who presented Kellianne with her prize, says: ‘The annual presentation ceremony is a true highlight of our year and we are delighted to have awarded Kellianne, recognising her hard work. Increasing skills and knowledge within optical professions is as important now as it ever was, and these qualifications open up a wide variety of career paths.’

Bodmin Specsavers store director, Jo McLean, adds: ‘We’re extremely proud of Kellianne and her achievements. She is a valuable member of our team and the award is great recognition.

‘We encourage our staff to carry on learning as they work, for the benefit of all the members of the public they will deal with over their future careers, and we are so pleased that their hard work and commitment has been rewarded by the WCSM.’