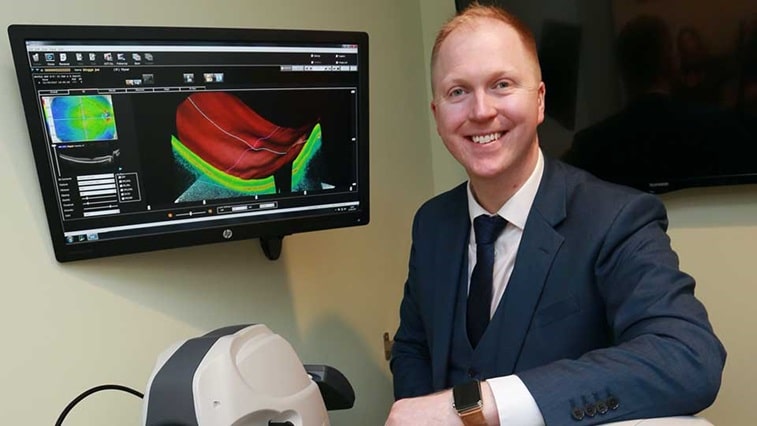 I remember being fascinated by a programme that I saw on the Discovery Channel when I was a teenager.
It showed the concept of attaching a camera to the brain of people who are visually impaired, to help them see again. That really embedded an interest in the concept of vision and research for me.

I actually applied for human cybernetics and got accepted at Reading University. But I came to the conclusion that the technology was in its infancy. I decided it would probably be wiser to study vision and vision research first, and then come back to the technology aspect when the other parts of that ambition became more of a reality.

As I learned more about optometry, I was genuinely fascinated by the career and the way that you can always learn more. There’s the psychology of the neuroscience of vision and perception, there’s the physics of the lenses, there’s the medicine and pharmacology, and pathology and therapeutics, not to mention the social psychology of patient compliance and customer service, the discipline, or the human resources aspect, and all the various aspects of business planning, from managing budgets to overheads, strategy planning (which we’ve had to do a lot of during COVID-19), and knowing about investments for future success. I think it’s a brilliant career choice.

I’m from Northern Ireland, and I moved to Glasgow Caledonian and did my degree there. I went on to do my pre-reg in Boots at Princes Street in Edinburgh. Halfway through that my supervisor moved over to the Gyle, so I followed her to the Boots Opticians there.

After I qualified Boots asked me to work in Manchester.
I didn’t want to be away from my girlfriend, who is now my wife, so I looked into surrounding opticians. I had submitted my CV to a lot of independent opticians, so I worked at one of those. I had also bought a lot of my own equipment, because I was offered domiciliary work and it meant I had my own equipment for a business as a locum. I went on to work in a prison for a while.

I was then offered regular employment with Dolland and Aitchison (D&A), because I used to do locum days there. My wife and I were looking to buy a home at the time, and Edinburgh prices were disproportionately high. We were able to find a three-bedroom house in Dunfermline, for the same price as a one bedroom flat in Edinburgh. So, we moved to Fife and commuted about an hour each way. And then Specsavers offered me some work in their Dunfermline branch, five minutes’ walk away from my house.

I went for an interview at Specsavers and was pleasantly surprised when I got there.
I had reservations about working for such a large organisation, because the independents that I had worked for, as well as Boots and D&A, all had me believing that there wasn’t the same level of professionalism or patient care in Specsavers. There totally is, and to be able to do it consistently and with such quantity of patients speaks volumes about the calibre of the optometrists that work in Specsavers. At the Dunfermline branch they had loads of really skilled and really enthusiastic dispensing opticians and they even had a typographer, which was mostly unheard of.

Andy and Grace, the directors, were welcoming and friendly, and they enabled the staff to be the best they could be. While I’ve been managed by good people in the past, I’d never received that sort of leadership and management before. It was a delight to work there, especially coming from cultures where I had to present a business case just to get an Amsler chart replaced or to get a decent stereopsis test.

Michael’s career highlights
1. Finding the correct diagnosis
When I was at D&A, there was a patient who had a psychiatric disorder. There was a carer with her, and he advised that they’d increased her medication because her behaviour had really changed. And she had really bad papilleodema. This was quite early on in my career. I referred her on urgently, and I got a letter back thanking me because she had a tumour the size of the tennis ball. That was the whole reason for her behavioural changes, and they’d just being medicating her, assuming that it was a psychiatric disorder.

It was a real standout moment. It made me appreciate just how important it is to see the person and not assume that A plus B equals C. You have to take the whole person into account. I know that the team that did the fields and all the rest really did save her life.

2. Slit lamp innovation
I bought a 3D printer and invented my own slit lamp camera, because I was shocked at the price of it, and I wanted to be able to make sure that I was taking good records for my patients. I built it and met with a consultant, Andrew Blakey, of St. Andrews University, and we’ve been talking about maybe using it for a telemedicine in the developing world.

3. A supportive environment
The privilege of working with my team is a really big one. During COVID-19, the way people have been so resilient and supportive has been wonderful. There have been lots of moments, especially when my daughter was born three months prematurely, that the team really held together for me. I’ve always felt very proud of that.

I studied my IP at Glasgow Caledonian, and my professional certificate in paediatric eye care at the University of Ulster.
They were both while I was working full time. I did them after work, and there were a couple of times that I had to book holidays off for exams. On the paediatric course, there were days that I travelled back home for some face-to-face tutorials, because there were practical aspects to it. When I studied for my professional certificate in medical retina at UCL, I travelled down to Moorfields a couple of times to have face-to-face tutorials.

I started my IP quite early on. My son was born in 2012 and then my daughter was born prematurely, so I had to put it on the back burner twice. In terms of clinical experience, the hospital could only offer half days. So that meant almost a whole year of clinical experience before I had enough under my belt to be eligible to sit the final exam. I think I ended up finishing in 2017.

I think the Scottish optometry system is above anywhere else. I’m really proud to be part of it

I’d always aspired to have my own business and be my own boss.
Given my desire to have all the tech and clinical repertoire, I had always expected that I was going to have to have a boutique optician to have the overheads covered. But working at Specsavers in Dunfermline, I realised that actually I could be the clinician that I wanted to be.

At the time I was accepted to do my PhD with Aston University. Then the opportunity to open up a branch in Morningside in Edinburgh came up, and I decided to seize the opportunity.

Owning a business requires a lot more work: I was working six, seven-day weeks for the first four or five years. My practice has never had a test time shorter than 30 minutes. At present I’m doing up to 45-minute appointment slots due to PPE and COVID-19. In Scotland, we have a first port of call system where GPs won’t see you; everybody has to go to the opticians if there’s a problem with their eyes. So, often I have to prescribe medications for emergency walk-ins. We have a clinic that runs for about 45 minutes for that.

What I love the most about optometry is being able to find a solution for the problem that a patient presents with.
There are lots of jobs out there that exist where your role is just a component in a larger machine or product, and it’s easy to lose sight of the contribution that you can make or the significance of your role. But I’m quite proud to say that I’ve never felt like that as an optometrist. It’s a really unique all-rounder. Within optometry, there’s so much breadth to the subject.

I still want to contribute to vision research, in the long term, and help people with a severe visual impairment to see again with the help of technology. I’ve started my journey towards that: I’m studying my master’s in investigative ophthalmology and vision research, and I intend to go on to do a PhD in vision research and neuro development at some point.

I think the Scottish optometry system is above anywhere else. I’m really proud to be part of it. That’s part of the reason why I became vice chair of Optometry Scotland. It’s world-leading, and I want to be part of that.

Plan B
I don’t want to sound like a frustrated doctor, but I probably would have gone into medicine. My careers teachers in school weren’t very imaginative. It was very much, “you become a doctor or a pharmacist or a lawyer.” And I had always wanted to be a doctor.

Then I had a sliding door moment, where I had fallen and severed my hand. It took a good seven months for it to heal. This was when I was 17. It changed my predicted grades at A-level, and my careers teachers had advised me, “actually, you’re predicted three Bs at best, so you’re probably not going to get into medicine. So I would maybe start thinking about other career choices.”

I got three As. I don’t regret it. I think that actually, life has turned out really well. Sometimes, the amount that I let a retest affect me, I don’t think I could cope with making life and death decisions for certain patients. I think I’ve made the right choice.