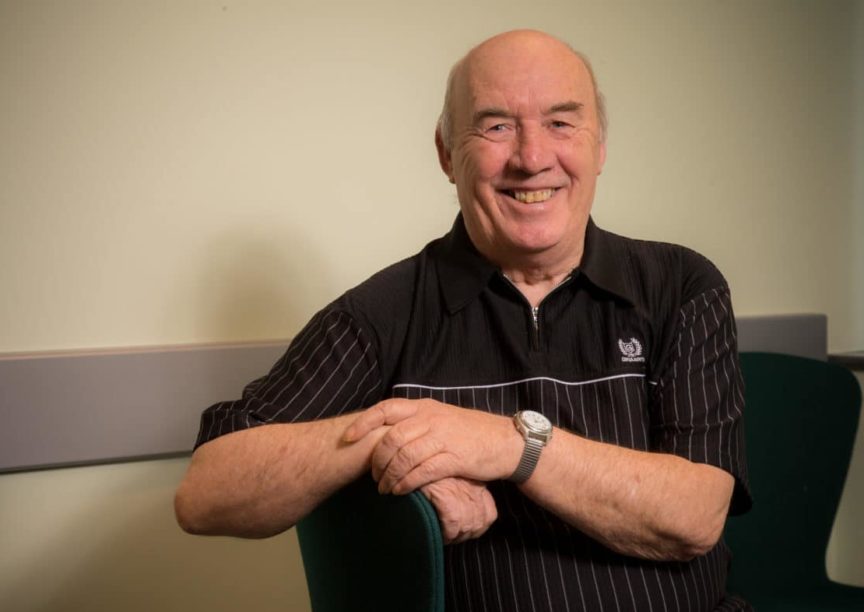 Micheal Saunders, a lorry driver of 40 years, was forced to give up his job after being diagnosed with wet age-related macular degeneration (AMD), and losing his central vision.

The centre, a collaboration between Aneurin Bevan University Health Board and Specsavers in Newport, is the first of its kind in the UK where a high street optician provides initial screening and referrals for people with symptoms of wet AMD, and NHS staff deliver treatment for the condition at the same location.

‘When I was first diagnosed 10 years ago, treatment for AMD wasn’t available on the NHS in Wales. I had to wait six months before I had treatment, which is a long time as I was told that vision can deteriorate within days in some cases.

‘It was like I was hit in the chest when I was told I couldn’t drive any more. It was a huge part of my life – I’d driven throughout the UK, Europe and America so to have this taken away from me has been really tough.
I’d noticed my sight deteriorate over a couple of weeks and one day it was as if my vision was clouded by thick fog. I went straight to Specsavers.’

After an eye test, a Specsavers optician referred Micheal to hospital for further tests, which confirmed he had developed the sight-threatening condition.

‘For years I was treated at hospital, which would often mean long waiting times, but since the treatment centre has opened it has been fantastic. All of the experts are under one roof, it’s a convenient location and there’s no long delays around appointment times now. It’s taken away the stress from having the treatment every month.’

Jason Williams, optometrist and director of Specsavers in Newport, said: ‘The speed that someone receives treatment for wet AMD is absolutely crucial. With more collaborations between primary and secondary healthcare providers, it will give patients faster access to assessment and treatment, which is absolutely vital in helping to prevent avoidable sight loss’.

The scale of the problem
The alarming scale of eye health problems in the UK demands action. In the ‘State of the Nation Eye Health 2016’ report, research estimated that more than two million people in the UK live with sight loss that is severe enough to have a significant impact on their daily lives, such as not being able to drive.

This includes approximately 475,000 people who are suffering from age-related macular degeneration (AMD). AMD is also the leading cause of blindness in the UK.

A year on, the latest State of the Nation report (2017) recommends delivering AMD services in the community, bringing the treatment closer to home to reduce patient costs and waiting and travel times.